I may be biased since I do have an affinity for this series, but I loved this issue. One of the things I have definitely been enjoying is the fact that this series isn't only about Wonder Woman: it is about a group of people who have every reason not to get along but in fact they do. Azzarello has been careful not to be too obvious in depicting this new version of Wonder Woman: instead, he has focused on her attributes as leader and hinted through her actions at her compassionate heart that drives her. While previous issues this compassion had been implied, here it seems to take center stage and is directly mentioned by her adversaries who seem to be planning to use these qualities of her character against her. Only time will tell if they do in fact succeed.

The issue itself is very lovely: beautifully illustrated by Goran Sudzuka and Tony Akins. The pair take over for artist Cliff Chiang and manage to capture the same tone and style that has made this series so aesthetically pleasing, while maintaining their individuality in the process. The result is a very pretty issue that is a pleasure to read for the sheer fact that it is attractive. The artistic team does a fantastic job at bringing one scene in particular to a boil, and it is executed brilliantly. Orion had this coming and it is great to see Diana take matters into her own hands and put him in his place. The result is a scene that is humorous and incredibly entertaining in terms of dialogue, as well as attractive. The panels flow with the story and the artistic team really takes on story-telling duties.

This issue does a great job setting up the next installment of this story and there is the sense that not everything is going to go too smoothly. It really feels like Azzarello is gearing up for a brawl between the First Born and the Amazon and her team, so it will certainly be interesting to witness the story develop. Diana has taken on a lot of responsibility: not only is she leading a team, ensuring the safety of a newborn baby, but she also seems to have heaven and hell against her succeeding. It will be very cool to see her tested in the upcoming issues.

Aside from the fact that there were some moments (two) where I felt the story did not flow well in the sense that I think it could have been a bit better organized, I have no real complaints about this issue.

If you thought the gatefold cover was just a way to garner sales, you will be happy to know that what happens on the cover just might happen inside the comic. It's a very entertaining scene that completely catches the reader by surprise but still manages to be very good. The issue itself is great: it feels like a continuation of what we've been reading for the last two years but also feels fresh and new -- the story feels invigorated. It's an accessible read which will be pretty easy for new readers to pick up and begin following along, and I think it is one issue that really does a good job establishing who this version of Wonder Woman is. Gorgeous art and a fantastic story will leave you looking forward to the next issue. 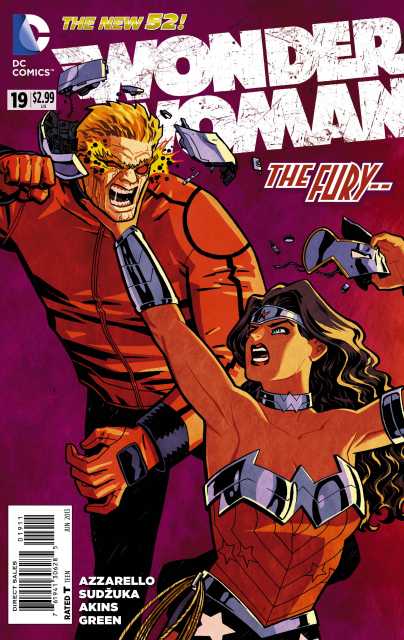