Geralt gets on a literal ship of fools and tries to educate them on exactly how monsters work.

Paul Tobin and Joe Querio are BACK telling some new, awesome stories of Geralt of Rivia. And they absolutely get it done. After last year’s solid HOUSE OF GLASS, it was great news for fans of Geralt of Rivia that the two creators would be reuniting to bring us further side-tales of the charismatic, deadpan anti-hero. The story opens as Geralt and a dwarven miner awaken to some fresh pork. A bit too fresh, in fact, as they’re then set upon by a troll though this interlude is much more about introducing us to the two main players than it is getting any story across. It’s effective in that role, though, as we see the curmudgeonly dwarf clash with the straightforward approach the Witcher takes to 90% of life, but there’s a real feeling that it’s all in good fun. It’s when the two arrive at a dock that the real tale begins: a tale of abduction, ransom and revenge as well as, of course, plenty of monsters all aboard a single, small vessel. Tobin wastes little time sinking us into the world and establishes it in short order with tremendous efficiency, as well as letting the reader get to know the supporting cast of shifty-eyed crew that are aboard the ship. Of course there’s a great reveal at issue’s end that spells far, far more trouble than even the suspect crew could’ve imagined.

Querio’s art sets the tone and suits the style of both Tobin’s writing and the world established by Andrej Sapowski’s novels, as well as the videogames based on them. Querio’s linework is solid with just a bit of a sketchy edge, lending a sense of legend and myth to the visuals and his colors are appropriately drab and dark, setting a tone of general woe and dread.

First things first: much like the last title from these two, this is an issue for fans of The Witcher series of media. While there’s nothing especially wrong with making something that’s more for fans than newcomers, it does make the introduction of the two protagonists feel on the ham-fisted side. Personality traits are fired out one after another, but the world itself doesn’t get much establishment, and a great deal of it needs to be inferred from context, but it also doesn’t become terribly obvious at any point.

Querio’s art looks great across the board in close-up, but a few panels that illustrate characters from a distance lack detail, reducing the characters to blobs (though he was smart and gave them all different enough wardrobes that they can still be recognized).

This is a no-brainer for fans of general lore who STILL haven’t had their fill before the next massive videogame release for Geralt. While it’s doubtful this will tie directly into it, Querio and Tobin get the characters and setting well enough to give fans plenty to enjoy, though newcomers may want to seek out either the first book or even game, as the comic becomes far, far more enjoyable with that context already established.

I didn't even know this had anything to do with a video game. Perhaps I read it before but I must have immediately forgotten or simply ignored that piece of information.

I really don't like this series. As a big fan of both Books and Games i must say this is a real downgrade for The Witcher

@donfelipe: the game is so good!

@drellassassin: the first volume is on Nook books from Barnes and Noble. You can buy the digital version for $10.

@mrtummytumms: I'm not a big fan of playing video games anymore but I still remember playing NBA Jam and Super Mario Kart on SNES back in the day. That was fun!

Why not just get it on Dark Horse Digital?

Ah, I haven't read any of Witcher yet. Still, I love the cover of this - will go have a look for it.

Why not just get it on Dark Horse Digital?

Just saw your comment on this. I would, but I really like to have all of my comics in the same place. 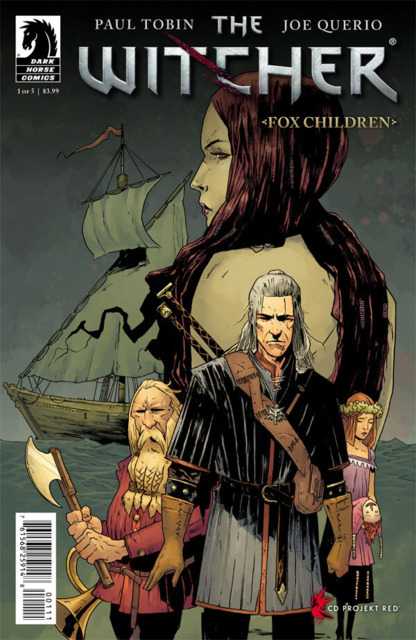