WAYWARD immediately embraces the weird (much like backmatter essayist Zack Davisson notes that Japan itself does), and before the first issue ends, we've got supernatural action. Not hints, not mysteries -- just straight up kappas and a girl who's probably a cat.

And with all of that wild stuff going on? Our heroine, Rori, is trying to focus on connecting the dots in her personal life -- which is having an upheaval of serious magnitude. She's balancing an intercontinental move, a split family, and probably a hefty amount of normal teenage angst plus dealing with sword-wielding turtles. Rich story potential? In spades.

Everything about WAYWARD feels thoughtful and planned. Rori's solitude is emphasized at every turn, from her solo arrival at the airport to her self-directed tour around town, and it makes Ayane's arrival (and sudden departure) feel more significant. Visually, there's an incredible amount of consideration as well -- detailed environments and interesting camera angles make the world feel immersive and drive the action forward.

One thing that's definitely intriguing, even though it's hard to tell how much it'll weigh on the story's direction: Rori is half-Japanese and half-Irish. It's already clear that we're going to see sampling from Japanese folklore, but is there a significance to Rori's Irish roots, too?

The ghostly white line art that's used in some of the scenes isn't really to my tastes. It works for the intended effect, but I always get the same sort of visual impact that comes with staring at a bright light and looking away.

WAYWARD is a truly unique offering, even in the already-diverse selection Image has been publishing lately. For now, it's age-appropriate for a wide range of readers, and it explores Japan from a supernatural angle that isn't often seen in Western comics. Zub, Cummings, and team have piqued my interest, and I can't wait to see how a feisty half-Irish teen handles being swept up in Japanese myth. 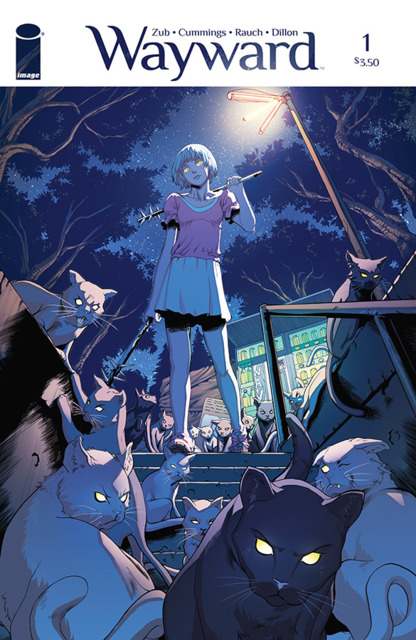