The story of the Visions reaches its conclusion. It's been an amazing journey.

Vision has always been a complex character. As a synthoid, he's been shown to have different layers to his personality as he's coped with different situations. Tom King has taken all that to a completely different level. The idea of Vision creating a family and living in the suburbs sounded weird. King showed us we had no idea just how weird, disturbing, and emotional it could all become.

Each issue delivered a gut-punching feeling. The struggle of a robotic family fighting to fit in and protect themselves was brilliantly executed. While containing elements of your typical superhero comic, there was so much more beneath the surface. The final issue is painful in two ways. We obviously don't want the series to end. Seeing how the different story elements were wrapped up resulted in a mix of emotion. It's hard to think of many series with the ability to sink its claws into your heart. Each issue had the ability to make you want to cover your eyes as you watched the events unfold. There were some happy moments, but seeing how dark things could get would leave you with a heavy feeling long after you finished reading.

Final issues often have a bittersweet feeling. King gives a satisfactory one that hits all the marks. It's been abundantly clear from the first issue we wouldn't have a happy storybook ending here. At the same time, it's not all doom and gloom. Some things, like the end of this series, were simply inevitable. Readers, and the remaining characters, are left with the task of trying to pick up the pieces. For myself, it feels as if my heart's been broken with the decisions that were made and the repercussions. I've always enjoyed Vision as a character, but he was never among my absolute favorites. I never thought a solo book featuring the character would mean so much to me.

Gabriel Hernandez Walta and Jordie Bellaire have done amazing things with the visuals. The art and color fit the story perfectly. With King's writing, it's been a stunning experience. Despite the nature of the characters, you get a great sense of the emotion from them and in the vibe of the atmosphere. You feel what they're going through, and it simply enhances the elements of the story.

The downside is, of course, the series ending. We've had a remarkable creative team here that worked in unison. As joyous, and sometimes painful, this series has been, I'd rather see this version end instead of a new creative team attempting to continue. Perhaps we'll see what's left of the Visions in another series. For now, these twelve issues are enough to stand on their own.

We've seen countless stories of computer A.I. vying for control for their place in the world and the complexity of their existence. This series contained more emotion than other titles. Seeing the extent a family member will go to in order to preserve the sanctity of their union was fascinating and heartbreaking. Tom King's writing made us squirm and cringe in our seats, yet we were completely glued to each and every single page. Something truly amazing happened when King, Gabriel Hernandez Walta, and Jordie Bellaire joined forces to tell us the story of a synthoid family in the suburbs. All good things must come to an end and all that. I'd love to see more, but I am incredibly thankful to all involved in this series. This is an absolute must-read. It's not often a comic can deliver so many emotions. This book has been an eye-opener and has become one of my top-recommended series. 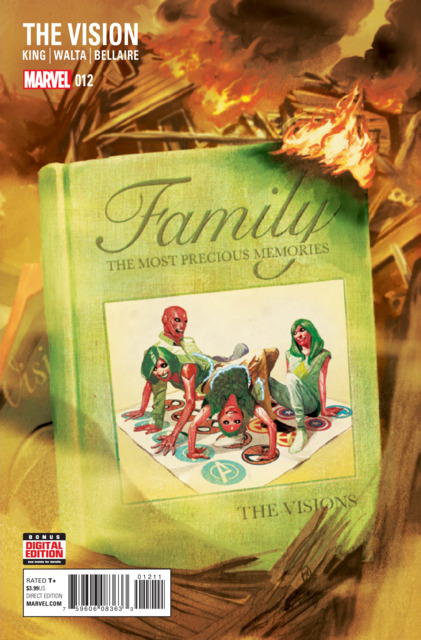