Venom is an Agent of the Cosmos!

Venom breaks free from the Guardians of the Galaxy to become an Agent of the Cosmos. What exactly is that? Well, Flash Thompson wants to know as well.

The events of VENOM: SPACE KNIGHT takes place after a little story in GUARDIANS OF THE GALAXY, right before "Black Vortex," where Venom, along with the Guardians, headed to the planet of the symbiotes. There were big changes for Flash's symbiote, Venom, and changes for the character as a whole, and that's led Flash to be this Agent of the Cosmos.

How did Flash Thompson land this new role? What is his role? These are questions that are not answered in this first issue and only those who have kept up with the GotG series will have some of the answers they need. All Flash knows is that he received a message, that rings in his head, and he's off to track down a chemical weapon. While being thrust right into the action is a great way to kick off a book, the book just doesn't offer enough set up for the story that will take place in the series.

The first issue is chalk full of action though. As mentioned, the reader is thrown right into the mission and Flash has to fight off thugs left and right in order to achieve his objective. The overall issue is pretty thrilling and writer Robbie Thompson really does spend the majority of the issue giving Flash Thompson a unique voice. There's some humor thrown in here as well. It's not over-the-top, and tonally, it's a nice blend and the book doesn't take itself too seriously, but doesn't really come off as a comedy.

Ariel Olivetti's art is wonderful in this opening issue. Sometimes, his art can come off as a little stiff, which doesn't always lend well to action sequences, but the realism Olivetti puts into this book is tremendously beautiful. His color work and shading are top notch and the art alone is worth the price of admission.

Overall, this was a decent book, but it did not meet expectations. It's easy to see there's a tremendous amount of potential in this new series, but this opening offering simply didn't balance well and there's too many questions on the reader's mind by the time it's all end. We get to see Flash Thompson as a more defined hero in space and the art is great, but all-in-all, this is a middle of the road issue. 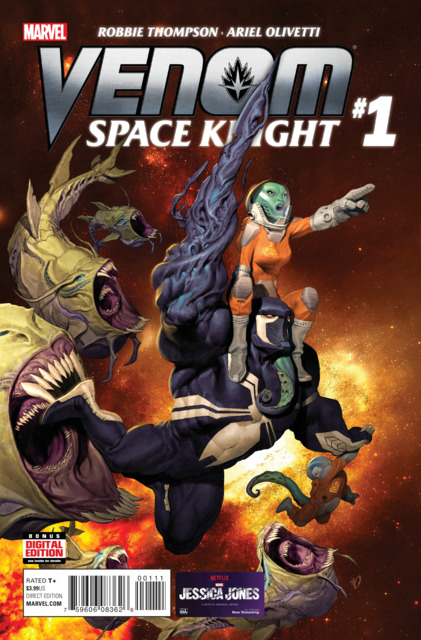