Mania continues to fight crime and... Daimon Hellstrom is dead?!

I'll admit I was't the biggest fan of 'Circle of Four' and what has stemmed from it (easily my least favorite parts of this series), but this new leap into the book's mystical elements definitely has my curiosity. Writer Cullen Bunn does an awesome job moving all of the pieces into place and, so far, this definitely feels like a more grounded approach to the mystical world that'll value character relationships over "Oh no, it could be the end of the world as we know it!"

I'm also really digging the relationship between Mania and Flash here and I can't help but feel like Bunn's going to break out hearts when Part 3 comes around. It's almost as if he's building our connection to her just to have something terrible happen in the final act. Hopefully I'm wrong, but only time will tell. Regardless, "Now. Venom up and let's go," could very well be the best line in this series... or from Mania, at least.

Jorge Coelho's art is... well, the best way to describe it would be like a less intense version of Declan Shalvey's style. It's lacking a lot of detail and gives more of an animated vibe when it comes to the standard human characters, but Ogre, Crossbones and Venom/Mania (in the symbiote, of course) all look solid. Also, Coelho's art really shines with the environment (though it's absent in action scenes to convey movement) and there's a good splash page of a devastated city early on. It's a nice little dose of potential foreshadowing to help us appreciate what they're fighting to stop.

Mania wants Lord Ogre's head on a platter, right? Then why'd she stand around and scream at him instead of actually going on the offensive? It's clear her lack of action isn't out of respect for Flash's order since she's blatantly disobeying him to begin with. Seeing as she blames that man for her father's death, I'm confused why she didn't at least try to rush him and she instead let him back away into the shadows. We've seen her navigating the city's rooftops, so it's not like that height was an issue while she's in the symbiote.

I don't mind the art, but I can't say I'm really a fan, either. It's pretty distracting when someone's hairline goes waaaay back and someone's neck extends much farther than it should. Also, minor gripe but I noticed Andi's rings kept changing color (between yellow and gray).

So begins the end of VENOM. I know, I'm sad as well and I'm sure we'll have a thread to serve as a support group when the time comes, but at least Part 1 of 'Mania' is off to a promising start! There's more than enough mystery sprinkled in this issue and Bunn does an able job showing us where everyone stands while introducing a few new aspects. It truly sucks to see this book go, but at least it's looking like the final story will be a good one. 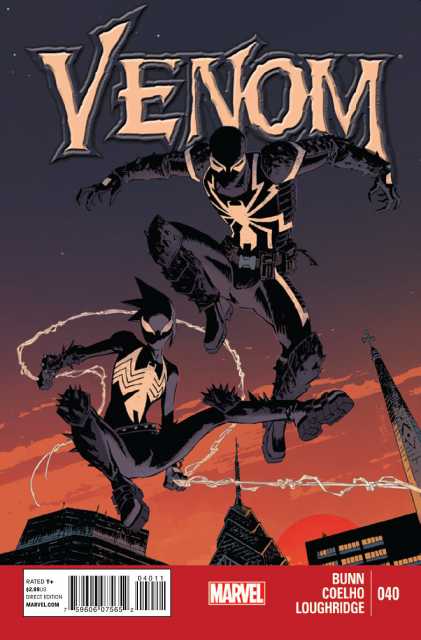