Venom tries to lead a simple life as he teaches gym class and fights crime at night, but we all know his life is anything but simple.

Month after month I praise Declan Shalvey's art, so when I didn't see his name on the cover I was hit by a bit of disappointment. Well, Pepe Larraz, I hope you can forgive me for that, because your artwork is TERRIFIC. It's a slightly more cartoonish style than what we're accustomed to and Flash certainly looks a bit younger, but man oh man is it glorious at times. Larraz absolutely kills it with numerous brilliant panels of Venom. From standard Agent Venom to the symbiote taking over, they all look so good. Larraz also excels with the action sequences, illustrating excellent motion which makes each superhuman attack have a real sense of force behind it. There's some wallpaper worthy panels to be found here. Lee Loughridge is still on colors, but with Larraz's visual switch-up, the book comes off as much brighter and livelier.

Venom's life is pretty basic after he and Toxin went their separate ways. Teach gym class, fight crime, get some sleep, and then repeat. Despite this seeming like a mundane concept, Cullen Bunn pulls it off by diving into Flash's mind. What makes his narrative so amusing is he isn't your traidional hero. He's not a boyscout (despite having dialogue every now and then which would certainly make it seem otherwise) and he's not a totally brooding anti-hero despite all of the negatives going on in his life. He's somewhere in the middle and he's trying to make the best of his new life. It's a formula which works for me and just enough new things were thrown into the mix to spice it up.

Oh, and as for the Venom-mobile. It took me a moment to decide if that was ridiculous or awesome, and I eventually reached the conclusion it's ridiculously awesome. It's obviously something we won't see again, but it was a hilarious way to switch up the dynamic.

I feel like the human trafficking twist is taking a note from SCARLET SPIDER, but I can live with that. Also, kind of odd for the big bad to see he's not afraid and then vanish like a ninja. Is it sheer arrogance? Is he studying him? Hopefully we'll find out in the next issue.

While Bunn's narrative is good fun and establishes a decent plot moving forward (most notably with Andi), it's really Larraz's artwork which brought this one to the next level for me. He nailed it when it comes to making the symbiote look both formidable and badass and his nights fighting crime (even if it's just one panel) have such a cinematic feel to them. VENOM consistently delivers and you have no good reason not to check it out. This is a superb jumping on point, too. 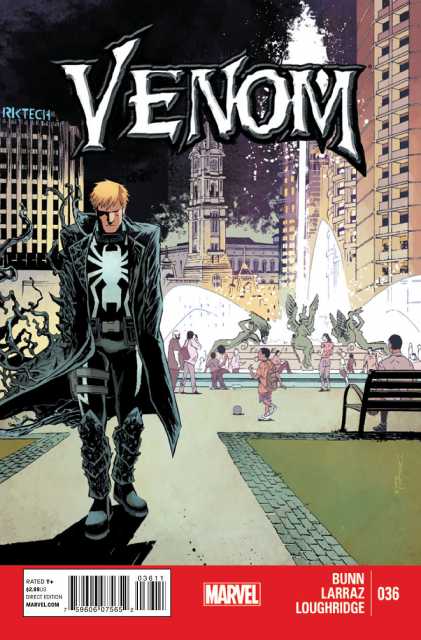