Velvet is several steps ahead of us, but it's really fun following her trail.

Spy stories are extra fun when there's a sense of discovery, and VELVET is totally in that zone right now. We get to follow the unparalleled Ms. Templeton via two third-party points-of-view and a trail of subtle (and bold) clues. And at the end? We reinforce what we already knew -- she's brilliant.

So, the cover. It's fabulous. It's so vintage pulp, with just the right combination of grit and simplicity, and if I weren't already a fan of this series, I'd pick it up just for that. The art and design on this book continues to be top-notch on every level.

And inside of that cover is an absolute page-turner of an issue. Handing over the narration to Colt and Roberts gives us the same riveting spy action we're used to, but with a layer of context that indicates, yes, Velvet is really as sharp as we thought she was. There's an in-world buy-in to the observations we've been able to make as readers, and it makes the story all the more exciting.

The issue wraps with an exciting tease for next month's intrigue. I imagine this is going to read really well in trade, but I can't bring myself to wait between issues.

Nada. This is another wonderfully-executed installment in a great series.

This month's VELVET shifts the POV to some of the other agents, but continues the thrilling spy tale with the series' usual energy and drama. Following Velvet's trail via her colleagues reveals additional nuances about our heroine, and solidifies her as one of the most interesting characters in comics right now. 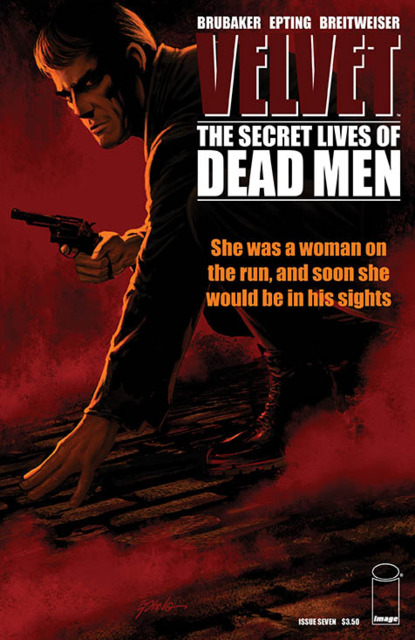