The Unworthy Thor #1 - The Hammer From Heaven

The former Thunder God is on a quest to become worthy once again.

The Asgardian formerly known as Thor is on a personal mission to become worthy once again. Since the end of Original Sin, Odinson lost the ability to wield the mystical Mjolnir. With another taking on the mantle of Thor, we've occasionally seen the continuing developments of the Asgardian.

To many fans, Odinson should be Thor. We still don't know what secret Nick Fury whispered that caused him to become unworthy. We can hope that will be one element included and revealed in this series, but the focus appears to be more on Odinson regaining his former glory. Thanks to the events of the recent Secret Wars, the Mjolnir belonging to the Thor from the Ultimate Universe managed to survive the destruction/merging of that universe with the main Marvel one. When Odinson hears of this other hammer, he sets out to retrieve it.

Sounds simple enough, right? Obviously there is much more to the story than Odinson easily finding and picking up another hammer. Jason Aaron sets up some intriguing obstacles to pull readers into the story. Odinson will have to work in order to find the location, and there's also the question of whether or not he'd be worthy to pick up a mystical hammer from another universe.

Olivier Coipel's art is always great to see. With Matthew Wilson's colors, the visuals are top notch. We're treated to some intense action scenes along with moments of Odinson reflecting on what his next move should be. The addition of a couple familiar faces within these pages adds to the excitement, especially with Coipel's art.

This is just the first issue, but there are some concerns to note. How long will Odinson be Unworthy? Will we find out what past event put him in this state? If he is able to wield the other hammer, will he be considered "Thor" once again? With Jason Aaron continuing the former Thor's journey, it's safe to assume a grand plan is already in motion. This issue sets up a bit and obviously can't answer all our questions immediately. Those questions will make you want to come back for the next issue.

For those waiting to find out what the future holds for Odinson, the stage is being set up to deliver them. Jason Aaron is joining forces with Olivier Coipel and Matthew Wilson to put the spotlight on the former Thor as he sets out to regain his worthiness. There may be some that desire his return to glory right away, but this shake up provides some mystery and intrigue to the character. There's a sense of anything goes, and you won't want to miss the next step in the former Thor's road to redemption. 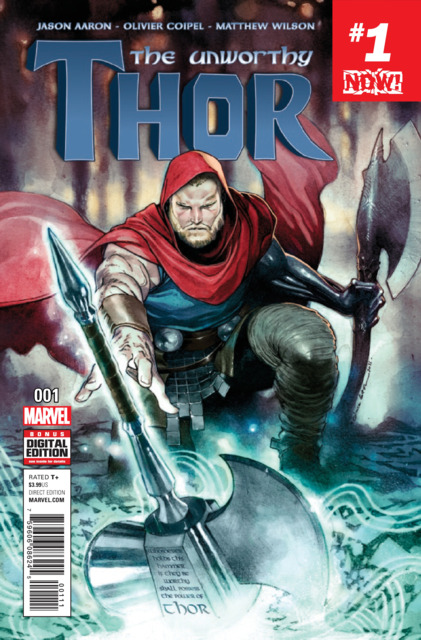