The mystery of Charles Xavier's last will and testament continues to unravel.

Something big is about to go down. At least that's what we're expecting when it comes to the big revelation of Charles Xavier's will. Despite the thought that Xavier's estate has already been settled, She-Hulk has come to the X-Men with a copy of the will and it's required that certain X-Men be present. With the tension between Wolverine's and Cyclops' factions, you can imagine how this could be a bit of a problem.

Besides trying to bring Cyclops together with the others, we also see more on the insanely powerful guy named Matthew who just destroyed his surroundings last issue. We can safely assume he'll play a role in upcoming issues. By looking at the cover, you can see that this is where Dazzler's new look debuts. Last issue she was seen dealing with the recent events against her.

Kris Anka's art is a joy to see. His work is so crisp and clean. He manages to put in subtle bits of emotion in the characters expressions without overdoing it. This is the type of art that immediately makes you want to see more.

Last issue was billed as the big ORIGINAL SIN revelation over Xavier's will. We still don't get the big revelation. Oh, there definitely is a big on here, just not THE big one. There was a surprise mention of one character as the will was starting to be read. Hopefully we'll find out why that person wasn't required to be present. Also, we're not expecting to see every single moment in the characters' lives. It just felt a little odd that Dazzler appears here in her new look and no one seemed to notice or comment. I felt bad for She-Hulk having to wait so long for everyone to get to the Jean Grey School. She should have called them first to arrange for everyone to be together before heading over.

Brian Michael Bendis is still laying out the groundwork for some shocking twists in the lives of the X-Men. This is billed as an ORIGINAL SIN tie-in but it's refreshing that the revelations coming actually don't have anything to do with that story. Bendis gives us a look at the characters and their relationships with each other (including having to deal with Cyclops) but we also see a new storyline being fleshed out with a new character having been introduced. Kris Anka's art is great. It's exciting to see the characters and you really hunger for more. We may not get all the answers in this issue but you'll definitely want to see the bombshells being dropped here. There's no telling what sneaky ideas Bendis has cooking for this series. 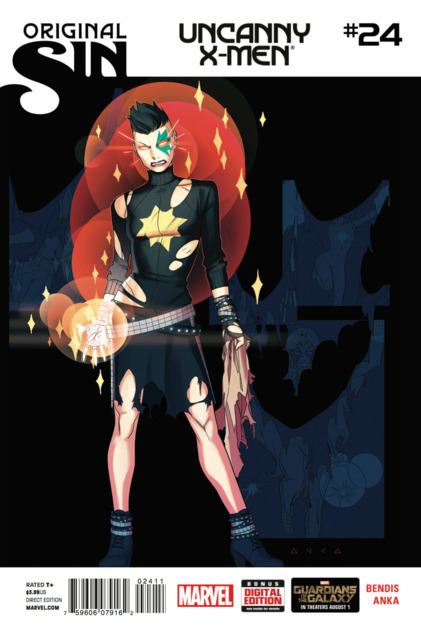