Charles Xavier’s last will and testament surfaces. A victim of the skrull’s invasion of Earth tries unsuccessfully to cope. An exiled student returns and a victimized mutant refuses to surrender.

This issue is positively chock-full of amazing, well-realized content. That’s a helluva way to start a review, I know, but I was just going over it in my head, and it’s the confluence of three storylines, all of them extremely well-realized, with a ton of witty, truly great character moments sprinkled throughout. The issue opens with two storylines that will end up bookending it, but the main focus is on returning the newly freed Dazzler, ex-agent of S.H.I.E.L.D. to Scott Summers’ academy, where she proceeds to have a nervous breakdown over her lack of closure in finding Mystique. If it were handled any other way, I’d actually have something of a problem with it as the “victim breaking down in the mirror” is well-traveled, cynical territory often used as shorthand for cheap character development, but the way Brian Bendis portrays it is not only effective, but actually heartfelt as she reflects upon all the roles she’s played. Meanwhile, Scott’s polarizing personality is dragged into the spotlight as he reveals that he knows what happened to Eva and just wants her to talk about it...traditionally, not the best way to go about such things. Summers’ ineptitude at engaging with his students out of a combat situation is actually a common theme throughout the issue, but it’s not always played for laughs and, in fact, is an incredible character moment for both he and the newly returned Hijack. This is an issue where a ton happens, but it almost all feels earned and like it’s building toward something.

Kris Anka is BACK on art and, as much as I love Chris Bachalo, seeing Anka back in full force reminds me of what I loved about his style in the first place. It’s so stylized and so, so smooth while, at the same time jagged. I know that sounds like a contradiction, but the character outlines are generally the parts that are smooth while everything within those outlines is jagged, giving a raw intensity to the facial expressions and actions while keeping the characters themselves fluid and dynamic. And these are some expressions that are calling out for some raw intensity. This is an action-light issue, opening pages aside, which is why I think Anka coming back is perfect: his style is suited to things like intense conversations and introspection and that’s what this issue does best.

One of the bookends of this issue, the one with the anonymous man, takes up a little more room than it really needs to. It’s a big lead up to a somewhat obvious swerve, whenever two unnamed characters are having mundane problems in a comic like this, it’s just to distract from the thing that’s ABOUT to happen. Sure enough, it happens and when said character returns by issue’s end, it only leads to further question. This is obviously by design, but it takes up more room than it needs to, especially considering the OTHER tangent storyline.

As much as I appreciate what Dazzler's going through, I really liked the idea of having her as a S.H.I.E.L.D. liaison and seeing that get completely scrapped with little-to-no development nor payoff is a little disappointing.

This is definitely the start of something much, much larger and I’m incredibly impressed with how well Bendis and Anka juggle and unite all these disparate themes and storylines, making all but one of them relevant to the immediate storyline. The one that’s left out will almost certainly become more relevant later. The characters in this issue are the real reason to read it, and they’re very, very worth it. Even for someone like me who absolutely loves what Cyclops has become, I can still delight in him being taken down a peg or two, particularly when it’s well deserved and well observed. 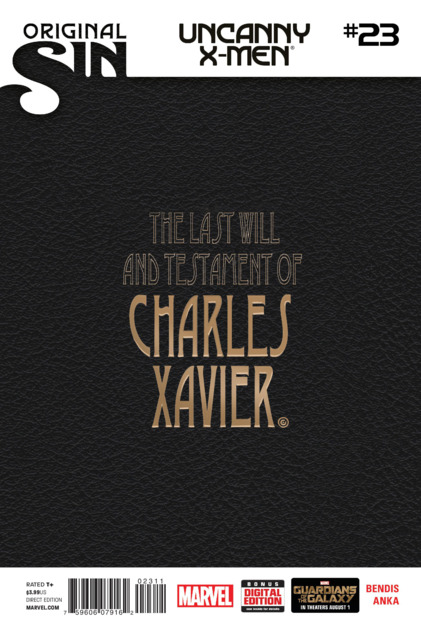