The villain behind the X-Men and S.H.I.E.L.D.’s woes at long last stands revealed!

The characters are the highlight of this issue. From Cyclops to Emma to Magik to Iceman, and everyone else, this is a character-driven, character-centered issue. And if there’s one thing that Brian Bendis does extraordinarily well, it’s write a massive, diverse cast with individual voices and motivations and that is what goes on here. Hank McCoy shines especially bright as he frantically tries to fix the shattered pieces of the X-Men’s already shaky alliance with S.H.I.E.L.D. and Dazzler, the real Dazzler that is, makes her reappearance and re-evaluation and WOW, a lot happened in this issue. I haven’t even been able to catch my breath to mention the insane, wild action and breakneck intensity that permeates almost every page and panel from cover-to-cover, which winds up being something of a mixed bag, but more on that later.

For now, let’s talk Chris Bachalo’s pencils. Bachalo’s a polarizing artist, as most highly stylized ones are, and I land squarely on the side of being an unrepentant fan. He illustrates in a sketchy, super detailed look that's somehow both jagged and smooth, chaotic and clear. It’s a hard look to pull off, but he does it amazingly well. The inks, done by Tim Townsend, Marc Deering, Mark Irwin, Jaime Mendoza, Victor Olazaba and Al Vey, are generally good and do their job of containing Bachalo’s wild, kinetic pencils, helping add to the smoothness, while Bachalo himself and Jose Villarrubia bring a beautiful, dark, razor-sharp palette to the story.

This story ends very abruptly and the revelation of the mastermind behind it not only seems to come out of left field, but has very little impact. It’s one of my favorite villains and it just comes and goes, having very little story significance in either long or short term. This title has had this many artists on it for the last few issues and, for the first time, I feel that it’s become somewhat problematic. Some pages are rendered flat, some of the inks are too much, and some of them reduce the finer details of certain panels.

The ending of this arc is somewhat weak, but only in comparison to how great the rest of it was and this certainly isn’t a BAD issue. I’m not sure if it was cut short to make way for an Original Sin tie-in or if it was always the plan to have it end on such an abrupt note, but either way that’s the ending we get. The art is still worth gawking at, the few flaws absolutely do not ruin it, and the characters are as well-written as they ever have been, particularly the one or two who get a new lease and a new outlook on life. I can’t wait to see where these characters go, and despite my misgivings, I absolutely can’t wait for the Original Sin tie-in as secrets are something this team has no shortage of. 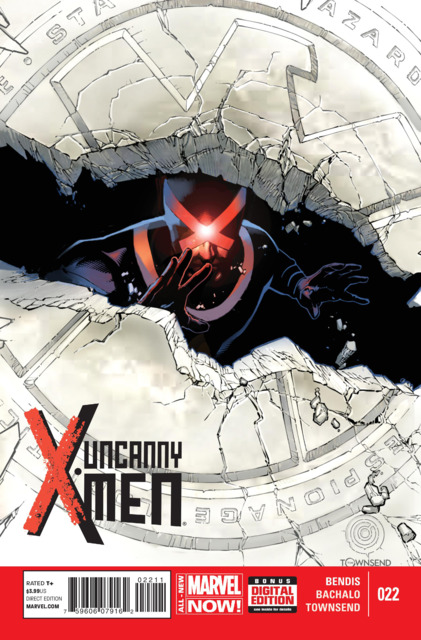