The Uncanny Avengers go on a heist mission. So of course Gambit pops up to make things complicated.

One of the things I really dig about this title is it's an Avengers title, but it's also completely different from other Avengers titles. Steve Rogers' idea of the Avengers Unity Squad continues with Avengers and mutants working together. Including an Inhuman into the mix should push things even further (although Synapse is absent here after the events of the first arc).

As mentioned in the last issue, the team is working on finding the Red Skull (who still has Professor X's brain). With some powerhouses on the team and skill level they all bring, you would think it'd be an easy task. The great thing Gerry Duggan does is make it more realistic and manageable. To find the Red Skull, if he's in hiding, you can't go around with guns blazes. Instead, you send a smaller team with some members carrying guns incase any gun-blazing is necessary. Rogue, Human Torch, Deadpool, and Cable are sent to gather some intel. This is such an odd group yet it they work so well together. Duggan balances the stealthy action needed and sprinkles in the right amount of humor at the appropriate moments.

Another aspect of the title is you never really know what's going to happen or who is going to stick around. In the first issue, we saw Spider-Man quit the team. Could we see another member quit soon?

It's always tricky when a different artist comes onto a series. Ryan Stegman will be back for issue #7. I miss his art but we do get to enjoy Carlos Pacheco's art here. Pacheco's art with Richard Isanove's colors look great during the intel gathering scene as well as the other big confrontation. All the characters present look fantastic.

While the story had some really good moments, there is one obvious let down I won't reveal. It's a sort of thing we've seen before and always makes you want to shake your fist at your comic. Hopefully this is something that will be addressed later. The story is pretty self contained even though it does add to the bigger Red Skull story we can expect to see. This made the issue feel like it went by quickly. Perhaps it's more of a feeling of being hungry for more. Also, when did Sin, Red Skull's daughter, get her face back? Did I miss something?

Gerry Duggan continues to bring the action, suspense, and humor to this title. With Carlos Pacheco coming on to handle the art, we get an exciting issue with a smaller group from the team going on a mission to find the Red Skull. Of course things don't go quite as planned and this makes the story intriguing but also a little frustrating. Uncanny Avengers is now a series where you have to expect the unexpected. 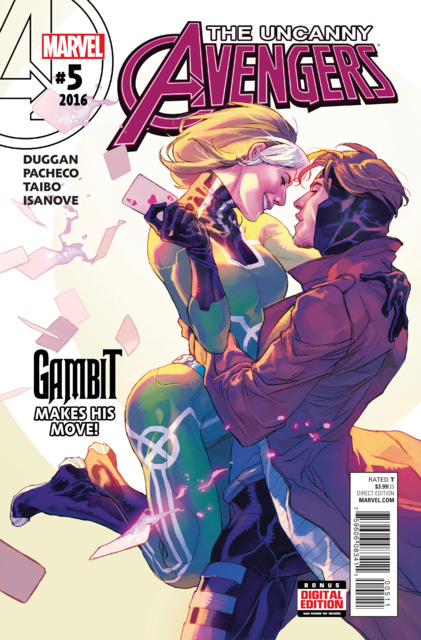