Steve Rogers leads a new team of Avengers, but can they all get along?

UNCANNY AVENGERS takes the unlikely line-up of superheroes, mutants, and inhumans and smashes them together, hoping for the best. This brand new team is lead by Steve Rogers, still in his older state, and features a team made up of Spider-Man, Deadpool, Rogue, Human Torch, Doctor Voodoo, Synapse, and Quicksilver.

This is quite the odd group of characters for the newest Avengers team. There are lots of big personalities here and of course, they're not all going to get along. Who seems to be the biggest problematic character? Deadpool. It makes sense since he's reckless at times and plays by his own, wacky rules. When the team was first announced, it seemed nuts, but within the context of the issue, it makes complete sense. This book is about unifying heroes in the Marvel universe. Most team books never have any opening bumps in the road. Everyone just works fine and dandy with each other. Here, there's a bit of a learning curve and the butting of heads and no, it's not just all just problems with Deadpool.

Team dynamic, which there is little to none here, is what makes this issue so enthralling. These characters know each other, more or less, but they're complete strangers for the most part. Something writer Gerry Duggan covers very well here is how these different personalities play off of each other in the opening to the series. There is a backdrop with a new Inhuman villain, but it's really secondary to the team coming together.

Artist Ryan Stegman works with colorist Richard Isanove on the first issue and one thing that really stood out was the design of Steve Rogers here. It doesn't look like the older Steve Rogers we've seen in the past, but it works for the character. He looks like an older war vet. He has the crew cut and a face that really shows his age. He's still really in shape for his age and I found myself really enjoying the reinvention of the character here. The only real problem within the art was the color work seemed too bright and popped out too much for the story. It felt like a contradiction to the tone of the story at times. Isanove is a very talented colorist and did some great work on ULTIMATE SPIDER-MAN, but his work seemed a tad too poppy for the issue.

Overall, this is a very solid start to a new series. It may not be the best for someone who is brand new to Marvel books, since characters like Doctor Voodoo and Synapse are a bit of a mystery, but what makes this book a step above the rest is how the team works and doesn't work together. This is really an amalgamation of everything at Marvel, representing almost everything the company has put together over the years, from Fantastic Four to mutants and everything in between. I recommend picking this issue up and checking it out for yourself. 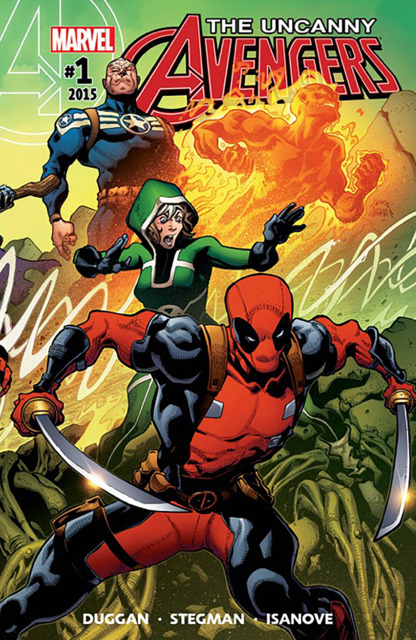