To save their universe, Sue must have a baby with Reed.

ULTIMATE FF continues to go off the rails and be silly, and it's a ton of fun. Now, the humor here isn't over-the-top, but it does break a bit of the tradition the Ultimate Universe has of being taken a bit more seriously than its 616 counterpart. The issue deals with the super-heroes from the Spider-Ham universe. This version of the Spider-Ham universe has dealt with all the same things the Ultimate universe has dealt with over the past few years, including the death of Peter Porker and the coming of Galactypus, which is easily the most genius thing in comic books. Miles Mohames is here to warn the Future Foundation that certain actions need to happen in order for the universe to stay alive.

Let's get the animal stuff out of the way; it's awesome. Seeing the first three issues suffer through some really rough art, which in turn, turned people off the book, was hard for Ultimate fans. This second half has been a lot of fun, and writer Joshua Fialkov is tapping into the ridiculousness as the series draws to a close. Characters like Hulk-Bunny, Ducktor Doom, and Simian Storm are the highlights of the opening.

All of these animal puns aren't just for fun though. It becomes clear to Sue Storm that in order to save the world, she has to have a baby with Reed Richards. How these two are going to do that is another story with an insane reveal page at the end of the issue.

As with the last issue, the art is better, but it's still just ok. It really could have benefited from an inker because everything feels so flimsy and frail. The thin line work from Araujo has a certain appeal, but putting an inker on this issue would have given the characters a bit more depth. In addition, the scribbled in shadow work does not look very good.

While the story is out there and it took 5 issues to really find a footing, ULTIMATE FF #5 is a hit. Sadly, it's coming to an end soon. Fialkov has a field day and throws as many animal puns into the issue as possible, and the issue ends in a very creepy/scary way, especially if the reader is a man. Flat-out, I like what's going on here, as an Ultimate fan. While it's no MILES MORALES, ULTIMATE FF, right now, is a ton of fun and a worth picking up. 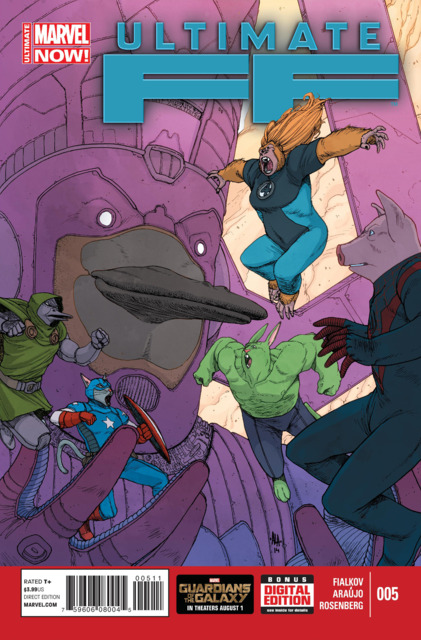