Ultimate FF takes a dramatic turn for the ridiculous

The first three issues of this series set up a team who had to save the world from horrors and villains that could destroy the world, with some of the worst art ever put out by Marvel. While issue #4 gets a new artist, who is a tad better, what changes here is that writer Josh Fialkov decided to have fun with the book, and it shows.

The tone drastically changes here and becomes a bit more fun and whimsical with jokes tossed about, like zombie Luke Cage breaking his teeth on Doctor Doom's arm and yelling "Sweet Christmas!" The story flickers out and the focus gets very out there by the end of the issue as it's revealed that Miles Morhames, the Ultimate Spider-Ham, is the key to saving the universe. Yep, this book is officially off the rails and it's the best it's ever been... in the four issues of its existence.

The last page is awesome and the redesign of a character we have yet to see in the Ultimate universe is very bizarre but very cool. If you're really interested in knowing who it is, it's hidden above, but strangely enough, I'm really excited for where this is going and the amount of puns that are going to be dropped on us in the final issue of this series.

The art did get better, but it's still not up to par. Artist Andre Araujo at least has consistency within his work and you don't have to squint to figure out which character you're looking at. However, the art is a bit stiff and feels very simplistic. Normally, Rachelle Rosenberg's colors are fantastic, but I don't think her style meshes too well with Araujo's art. The colors need to be a bit more complex and not as flat to make the art, as a whole, a lot more pleasing and maybe to distract from the stiffness as well. The shadows are really rough as well. Instead of going straight black, Araujo outlines the shadow and scribbles in the rest.

It's weird and at times silly, but this issue of ULTIMATE FF is fun, if nothing else. There's a new artist on board and while the art did get better, it's still the weakest part of the book. What readers do have to look forward to is Josh Fialkov having a field day with the Ultimate universe and as many puns as possible in the next couple of issues before the series ends. The last page is what really sells the finale of this book. 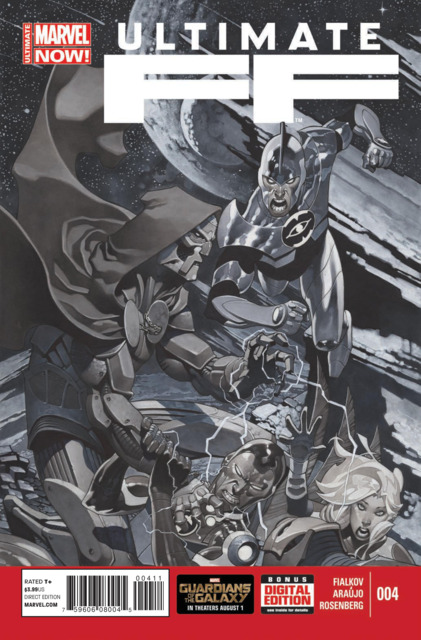