It's the end of World War X! Jean Grey and Kitty Pryde square off!

It's the conclusion to World War X! The final battle between Jean Grey and Kitty Pryde. Who will win it all, Utopia or Tian?

The build up to this final battle has been a long and extremely epic one. The actual battle between Jean Grey and Kitty Pryde is pretty fantastic, although it's pretty dang short. At the same time, Utopia's retaliation against Tian was something fans have really been looking for, and the end results were pretty dang cool.

The actual scenes, within Utopia are very pretty looking, especially the two-page spread featuring Rogue kneeling in the forest, sobbing. Alvaro Martinez's pencils, during the forest scenes look very nice, and his final page is set-up very nicely and has a cool perspective.

Gabriel Hardman's cover here is really nice. The colors and inks look very clear and crisp, and there's something about Ultimate Jean Grey, hanging by a thread, moments from her death that make me happy. I'm one sick puppy, I guess.

It was such a long and amazing build-up for such a let down ending. It's really the same problem I had with ULTIMATE COMICS SPIDER-MAN #28: it feels rushed. The final battle really takes place in issue #32, and what we are left with is a couple punches here and a quick wrap up before CATACLYSM begins. The destruction of Tian doesn't have the impact that it should have. I have a very good feeling that this issue will read a thousand times better in trade, but as a single issue it's a mish-mash.

Strangely enough, there was some not-so-great dialogue at the end of this issue. During the final battle, Jean Grey speaks in one-liners, much in the way we'd see Spider-Man speak while he's swinging through the city, punching Sandman in the face. It feels odd and very out of character for an "oh so powerful" villain on the brink of completely losing it.

I'm really not buying the ending either. Jean Grey has been trying to wage war on Utopia for months, and it got to the point where Kitty Pryde got so angry that she went herself to Tian to end the battle, and in the end Jean Grey gets a governor put on her powers and is allowed to live in Utopia. It goes against what Jean Grey truly wanted. She rolled over. This seems so unlike the Jean Grey we know.

ULTIMATE COMICS X-MEN has been an amazing series since Brian Wood took over. The build up to this battle was phenomenal; however, this issue was quite the let down. This doesn't feel like ULTIMATE X-MEN. It doesn't feel like Brian Wood. It feels like it was rushed out just so Marvel could march forward to CATACLYSM. This issue ends in the middle of something and tries ever so quickly to wrap it up. As I stated before, maybe this will read much better in trade, but as it stands, as a single issue, this issue #33 was a let down. 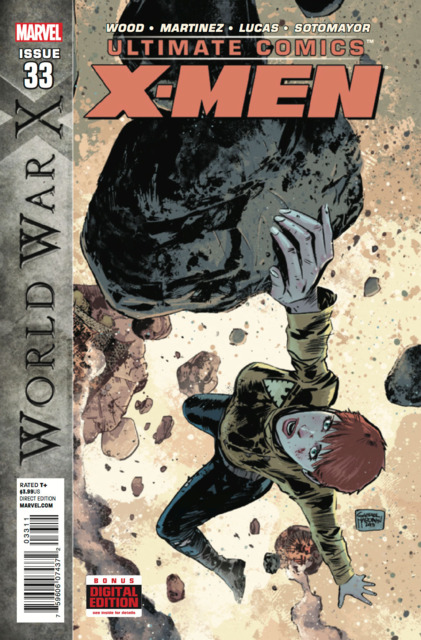