The American government invades Utopia to take down the mutants. Jean Grey finds out who Psylocke really is.

General Ross and his army invade Utopia and the mutants must come together, as one, to fight for their rights. Jean Grey and Psylocke, whom are both hiding something, square off, inside of Utopia.

While this book has been building up to a mutant uprising from Mach Two's group of mutants, all of that is put on hold as the military charges in to take Utopia down and to take back the land that Captain America gave to them, while he was President. We don't see something like this happen in comic too often. A bigger event or story has interrupted something building up for months. It may, at first, seem like a bit of a buzzkill, but I really enjoyed how this worked out. I love the idea that everything can be put on hold while a bigger threat invades. You know it's coming from the last issue, but it still throws you through a loop that everything you thought was going to happen.

Writer Brian Wood has done such a fantastic job with this series, since he jumped on at issue #13. This book is no longer about teens with super-powers forming a team. It's really focused around human rights and fighting for what's right. Take away the "X-title." Take away the "Marvel" stamp. Brian Woods has executed a fantastic and incredibly compelling story. It's one of the best crafted books at Marvel right now. It doesn't matter if you are familiar with these characters or not. You'll be sucked in.

The Jean Grey/Pyslocke battle is pretty darn cool. Again, this is something that builds onto something else and has numerous connections to other ULTIMATE books. I love seeing these books as separate entities that have elements and concepts bleed into each other. There's a great connection to the Ultimate world here, just through this one on one battle.

I'm back and forth about Mahmud Asrar's art on this book. I feel his style of artistic storytelling has really fit Brian Wood's style of writing, up until this issue. The action sequences felt a bit stiff here. He's great at conveying emotion through body language and facial expressions, but when it came to people physically fighting each other, it didn't feel as real.

ULTIMATE COMICS X-MEN delivers once again. This is an X-Men book on another level. While this isn't the conclusion the the Natural Resources story line, it keeps leading to bigger and better things. Asrar's art usually feels like a perfect fit on this book, and for the most part here, it really does; however, it felt a bit stiff in the action sequences. This book doesn't end with a huge reveal but it really gets you pumped for the next issue.

Overall, I highly recommend this issue.

If only Psylocke was really Mat Elfring.

If only Psylocke was really Mat Elfring.

We look a lot alike.

That would be kinda weird. ;) 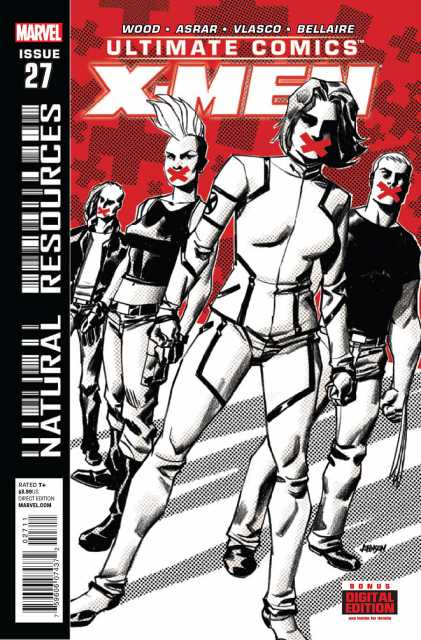