With a different Superman around, how will the Trinity get along?

Superman, Batman, and Wonder Woman have long been known as DC's Trinity. As DC's most popular and powerful characters, we've seen many stories focusing on the dynamic and friendship between the trio. With the current events in the comics that started right before Rebirth began, the status quo of the Trinity has changed.

The big change with the Trinity is Batman and Wonder Woman no longer really know who Superman is. Because the Man of Steel they knew died, they're not quite sure how much they can trust the pre-Flashpoint version.

Francis Manapul takes the reigns of the the Trinity to set up their new direction. With these three powerhouses, we don't often see stories like this. Manapul cuts right down to the nitty gritty by having Diana and Bruce pay a visit to Clark's farm.

Despite the five year run of the New 52 and the current versions of the characters, it's almost as if we're seeing them together for the first time. These three know each other, but at the same time, they're also strangers in some ways. Manapul does a nice job in establishing just how these relationships should be, with Lois thrown in as well.

Manapul's art and color are phenomenal. You will want to pause at times to take it all in. Manapul gives readers what they want. There are some nice striking pose shots, but the lighting and color in other panels are definitely noteworthy. This issue may not be super-heavy on the action, but it's not a huge complaint. A series featuring these three will likely be packed with action so it is a nice change of pace to see something a little different. Maybe it's not exactly the start every single reader will want, but it has me hooked.

Francis Manapul has a big task in front of him. Besides handling the writing and art duties, he has to drive a book featuring Superman, Wonder Woman, and Batman. This first issue shows how this isn't simply another Justice League book. There is some heart as well as we see Bruce and Diana get to know a Superman they're not familiar with. Manapul's art and color is as fantastic as you would expect. With a strange cliffhanger, you'll definitely want to come back for the next issue. 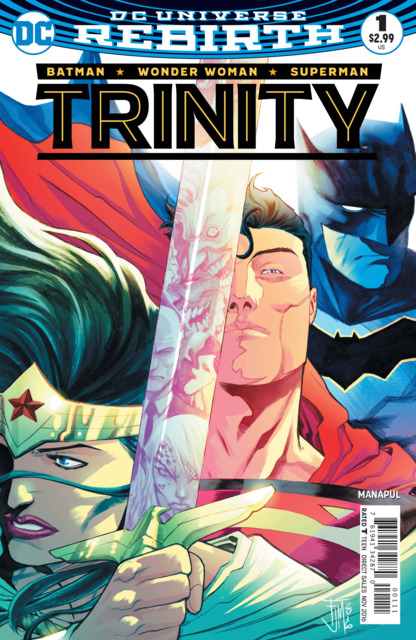