What happens when a woman from the future and a man from the past try to have a conversation?

TRILLIUM is a master class on dual narrative. As with the series' debut, Lemire tells a split story that brings Nika' and William's winding, divergent paths to a crossroads at the center of space and time, but he changes the format, to surprising and delightful effect. Issue #1 set two characters on a collision course for each other, their stories running in parallel in different halves of the book and meeting in the middle. The physical structure of the book ushered in a layer of connectedness to the story; we, too, met in the middle with Nika and William. Issue #2 keeps their narrative split, but instead runs in immediate (and local) parallel. The collision has already happened, but it's time to make meaning of it, and what better way to remind us of the story's inherent mysteries than to entrench us in two simultaneous one-sided conversations?

Lemire's execution of the pair's communication struggles is flawless; there's a balance between "on the same page and not knowing it because of language gap" and "not at all talking about the same thing," and it's disarming in its honesty. And, since it's in the interest of story progression to get Nika and William to common ground, the one-sided discussions have to start dovetailing -- that they do so through the comically simple act of doodling symbolic representations of their exponentially more complicated thoughts is perfectly charming. It's a moment that feels pure; despite the severity of their current peril (murderous natives and/or a futuristic plague), Nika and William connect in a meaningful way. The trillium flower's effects are powerfully illustrative, and cover a lot of territory that would otherwise take up time and precious page space, but the real charm is in the conversation that was already evolving before the flower sped things up.

And, of course, now that our lovers have finally started to get to know each other, they're cast apart again. It's a classic storytelling device, but it's also another opportunity for Lemire to take us on a narrative path that mirrors the situation of his characters and immerses us further in the story.

Perhaps the best part of TRILLIUM is re-reading each issue with another layer of context. It's clear, only two issues in, that this is the sort of story that's as powerful in the macro as it is in the micro, and I imagine that I'll relish reading it in trade as much as I'm enjoying the single issues. Lemire is a masterful storyteller, and TRILLIUM is proof of his talent for choreographing not just his characters' actions, but the ful reading experience. 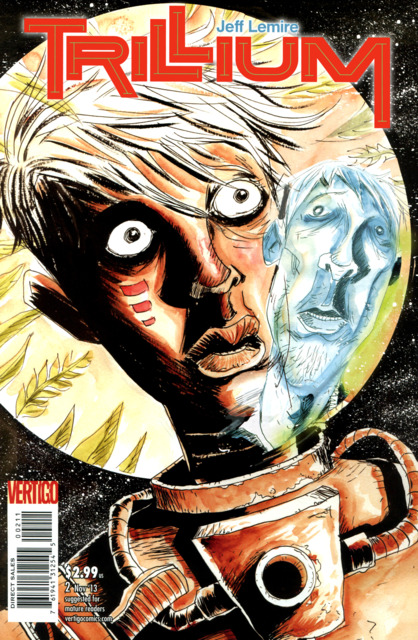