Put your space helmet on and get your machete. It's time for the last love story ever told.

TRILLIUM, on title alone, sounds like a work of hard science-fiction; cold, clean, robotic. In actuality, like the eponymous flower, it's delicate, intricate, and rich with mystery -- though there are certainly elements of sci-fi to be found. Jeff Lemire has composed a beautiful adventure, bookended by two different points in space and time, and assuredly poignant at their intersection.

It's "the last love story ever told," and while those lovers have only just had their meet-cute (if having a disoriented encounter with a stranger in fugue state counts as a meet-cute!), the tone has been set for a layered story of two incredibly different paths that cross in uncanny ways. It's far too soon to tell if TRILLIUM is a tragedy or a triumphany story, but it's undoubtedly interesting.

The shift in perspective from Nika in 3797 to William in 1921 is fascinating; on the surface, they're wholly different stories, from different times, and even different ends of the universe, but they're also the same story. Nika is among the last of the human species, in a strange new land, on the run from a plague. William is the last of his battalion, in a strange new land, on the run from his haunting memories of the war. Both are in foreign environments, drawn to the trillium flower because it represents life and healing, and both reject the warnings of a guide in their quest for it (they both seem to have a bit of an authority problem bubbling under the surface), and the convergence is breathtaking.

I found this issue to be thoroughly engaging and enjoyable, and have no comment in this category.

Jeff Lemire has distilled the art of crafting compelling first issues down to a science, and TRILLIUM is no exception -- layered characters on the verge of making interesting choices, a looming threat with meaningful consequences, a solution that seems too easy to be true (so we know it isn't!), and heaps of mystery. His sweeping, watercolor-tinged illustrations add to the otherworldly, adventurous feel of the book, and it's captivating from the start. 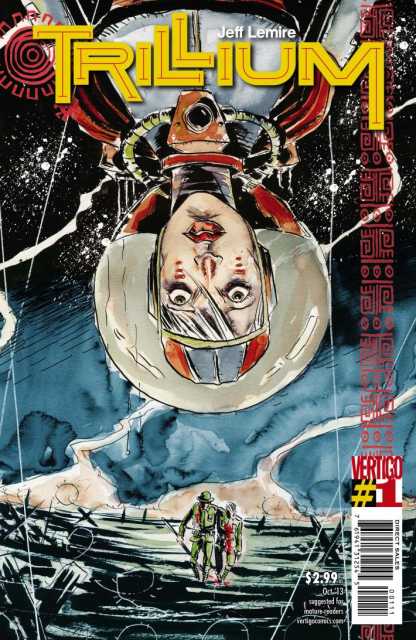