Titans #1 - The Return of Wally West Part One: Run For Your Life

With the return of Wally West, what does this mean for the Titans?

If you've been enjoying the direction of the recent Rebirth issues, Titans is a series you definitely should be reading. Wally West has been the guiding force in bringing back the core essence that's been missing in several characters. After having encountered his former teammates in the Titans: Rebirth issue, the big question is: What's next for them?

For new readers, there is some recap on the first few pages. If you're not quite up to speed, no pun intended, on who Wally West was before the New 52 changed the characters, you get a good idea.

Seeing Wally and his natural enthusiasm again is refreshing. The fact that he was the only one that really knew something. Despite this, getting the answers they need will take some effort. As we see the process unfold, we're treated to some great interactions between the characters that truly remind us why we cared so much about them in the past. While this happens, we do get to see a villain that's surprisingly has been missing the last few years.

As great as it is to see these characters in this light once again, it does feel a little weird compared to what we've been seeing. The enjoyment of seeing the characters like this overtakes the urge to try to think how or when these characters changed. There's a deep feeling of nostalgia mixed with the modern DC Universe feeling.

Titans is an absolute breath of fresh air in the DC Universe. Dan Abnett has brought back the essence of these characters. Brett Booth, Norm Rapmund, and Andrew Dalhouse are keeping pace with energy being generated by delivering on the visuals that capture the vibe of the book. This is a book anyone can jump into, even if you haven't been reading DC books the past few years. If you're invested in Rebirth and the mystery of how and why everything happened, this is a series to keep an eye on. With the return of a missing villain and the declaration made, there appears to be some crazy and exciting things headed our way. 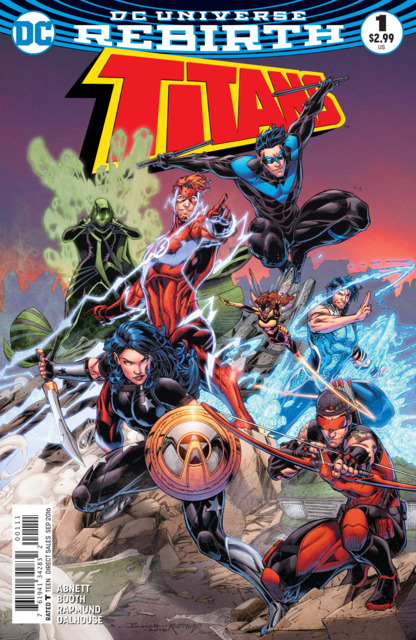