Rebirth has started, and it's time for the Titans to return.

Dan Abnett and Brett Booth have a tricky task to take on. When the New 52 reboot happened back in 2011, some characters had changes made to their history. With DC Universe: Rebirth, we know that the previous continuity still exists in a way. The characters are somehow the same as they were before. They're just living life with a portion of their past experiences missing. That's where it gets really tricky. These characters are pretty much coming from different places, but if we're talking about beings from beyond being able to rewrite a universe's entire timeline, we can accept what's happening.

By know it should be known how important this title can and will be. It was the original Wally West that managed to figure out what was going on. He's the only person that remembers what happened before. It's up to him to try to fix or change things. When confronting those closest to him, they have no idea who he is. The tension rises as the other Titans come across him and perceive him as a threat. If you read Abnett's Titans Hunt, you know they have an idea things have been manipulated. With Wally in this book, this could be where we get a lot of answers about why the timeline and universe was really altered.

Brett Booth and Norm Rapmund's art works here. They capture the action and intensity of the Titans coming together to confront Wally. Seeing the characters' present day appearances with the flashbacks is a cool thing. Andrew Dalhouse's colors adds to the vibe of the story. There's a nice mix of action with a great mix in the panel layout during the conversation portions.

As this is the Rebirth title before the first issue arrives next month, there is some set up. The book is accessible to those that didn't read Titans Hunt and even DC Universe: Rebirth. We get some great moments, but it's not too difficult to figure out how this issue has to play out before the series begins. There is a bit of a nostalgia factor. Those not invested in the original Titans might not feel the emotional tie or importance of the interactions here. Even if that's the case, the fact that this is following the events of DC Universe: Rebirth and Flash: Rebirth should be reason enough to check it out.

When the New 52 started, we saw many changes. Some of the changes were good and others bad. Rebirth is giving us a chance to see the return of certain elements without erasing or rewriting everyone's histories once again. Fans of the original Titans and Wally West will be overjoyed to see how the events unfold. Dan Abnett is continuing the seeds he started planting in Titans Hunt. Brett Booth, Norm Rapmund, and Andrew Dalhouse crank out the action scenes and spice up the quieter moments as well. This book has the potential to be one of the most important titles in the post-Rebirth DCU. You won't want to miss out on this. Just a warning, you might find yourself compelled to get out of your seat to cheer as the Titans are reunited once again. 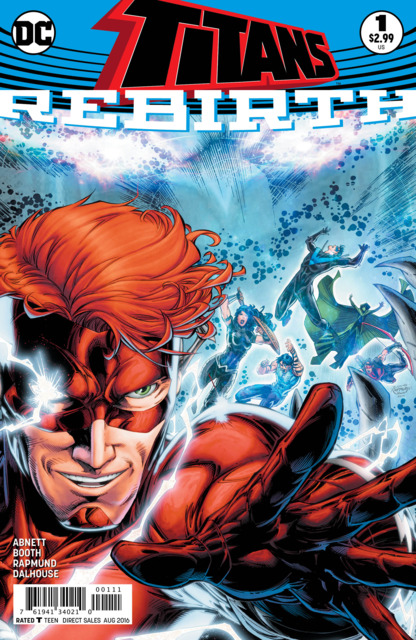