I’m going to try to be gentle about this: I don’t think Steve Dillon was a good fit for this book. I don’t think he did a terrible job or anything, but it’s a very action-heavy book, and his characters tend to be very stiff, so it’s good to see someone like Phil Noto, whose figures have a lot more dynamic motion to them, carrying on the artistic needs of the book. That’s absolutely critical in most cases, but particularly in a book like this that puts SO much of the emphasis on the two-fisted, guns-blazing action. Daniel Way’s writing has always seemed perfect, stylistically, for the book, and that continues to be the case here as the team realizes, and deals with, how unstable and embittered Deadpool has become over the new romance between Frank Castle and Elektra (who Wade had his eye on). Deadpool doesn’t come across as a particularly good person in this book, and I mean that in the best way: we’re reminded that while he might be the Merc with the Mouth, he’s also an absolutely merciless killer. Way’s recent Deadpool run is one of the best in recent memory, so seeing him continue to write the character is great, especially as he focuses on the characters’ pathos as much as his jokes.

This book could have been an also-ran Secret Avengers, but since the characters at play are much more discreet, it gives the book a very different tone. You get the feeling there is no “Nick Fury” or “SHIELD” reining this team in, and there’s a certain appeal to that since what they’re doing is pretty ugly at times, and the methods they use to get there are uglier still. This is like The Expendables of the Marvel Universe, but without the Seniors-only discount. It’s a lot of really great action, with everyone getting great one-liners, and just enough plot to hold the book together. Venom, in particular, has a great moment in the book.

The book hasn’t done a great job of fully exploring nor explaining that plot. Leader’s role in this book is completely enigmatic to me, and it seems like it’s not SUPPOSED to be as mysterious as it is. He’s been robbed of his intelligence, but he has some kind of autonomic functions, and there’s a code word that he used to blow up someone’s head in previous issues, also he’s now red like General Ross, and I just have NO IDEA what’s going on with him. I was along for the ride in previous issues, but this one ends with his role as the main cliff-hanger, so having no idea what his role was or what was going on with him robbed it of a great deal of its dramatic flair.

Thunderbolts, as a title, has a difficult task in the Marvel Universe: a team of legitimate killers with really only one traditional "hero" (ironically Venom, of all people) in their ranks, but the book has to sustain likability of the characters, or it risks treading into Suicide Squad territory, which is a fine concept for a book, but not really what Thunderbolts is all about. What's even more impressive is Daniel Way giving the characters unexpected depth beyond what's expected of them: Punisher and Elektra finding something in each other beyond "the kill," Deadpool's surprisingly tragic heartbreak at that situation, General Ross actually back in a position of leadership, and Venom as the surprising moral center of the group. This issue's also a great jumping-on point as it's the start of a whole new story arc. 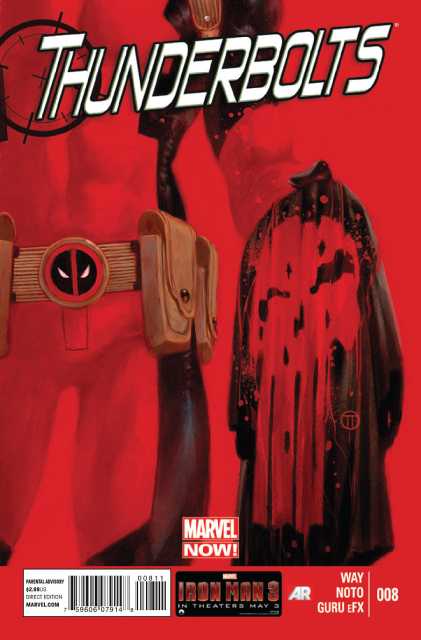