Thor: God of Thunder #9 - Godbomb: Part Three of Five - Thunder in the Blood

With the God Bomb nearly ready, can the Thors from three time periods marshal their power enough to stop Gorr, the God Butcher?

This is an absolutely amazing issue of Thor, and an stellar issue of any comic. The sheer amount of gravitas that Jason Aaron brings to the battle between Gorr and the three Thors is worthy of being enshrined in the annals of actual legend. At one point, the phrase “Moments Later, Light-Years Away” is used as a caption to perfectly show EXACTLY how hard King Thor just blasted the God Butcher and it’s one of the simplest, but most evocative and effective, phrasings I’ve ever read. Plotting has closed for business, this is a straight-up BRAWL for twenty pages. Yes, there are parts where no one is fighting, but they are the exception and even within those confines, Jason Aaron manages to characterize the three Thors in completely different ways with incredible efficiency, demonstrating the brashness of the Bloody Redeemer, the hesitant introspection of the Avenger, and the millennium-suppressed rage of the King, and squeezes in one of the most epic, jaw-dropping conclusions in comics.

Have I mentioned that Esad Ribic and Ive Svorcina are on art? Because that’s definitely worth mentioning too! This art is absolutely timeless, with an ancient quality but a modern sensibility. It’s like if an ancient Renaissance painting of an alien invasion was uncovered: the cognitive dissonance of the classical look against the sci-fi themes walks a razor’s edge of being too much, but it’s absolutely perfect. This is one of the few comics I’ve ever read that I literally couldn’t see anyone else doing a better, or even comparable, job on. You could frame almost any page or panel from this book as a work of art.

The only thing I could think of would be that, if you’re in the market for a traditional superhero book, this is about as far as you could get while still having a superhero’s name on the cover. This book, and this issue especially, is a legend in the most traditional sense: it is epic, it is fantastical, it has narration, the characters look like marble statues, but it has no capes nor tights nor blue hoodies nor even slick, streamlined black trench coats. Were it not for the aliens and other strange gods, it would fit right in with any actual Norse fable, and while I think it’s an amazing achievement, I could see it not being everyone’s cup o’ tea.

I have a hard time defining what, exactly, it is about this book that draws me to it, but there’s definitely something and it is a STRONG pull. I now realize the last two issues, which I wasn’t as fond of, weren’t dragging, they were leading. Specifically, leading up to this issue which, if I haven’t made it crystal clear, is nothing short of astounding. It’s always been tricky to find villains worthy of Thor’s godlike power, but Gorr is one of the best, and most compelling, ever and this issue represents the culmination of so many disparate elements coming together perfectly that I have to recommend it to anyone looking for a truly legendary book. 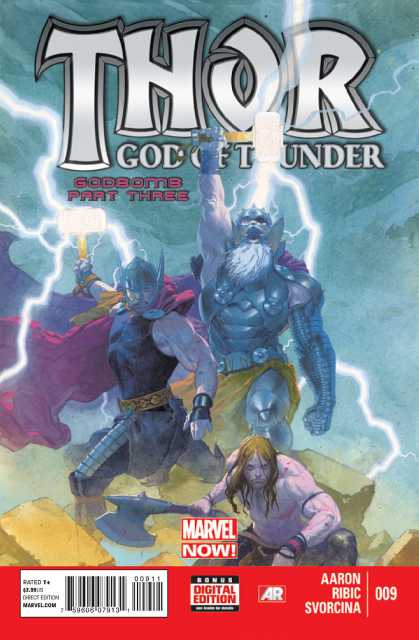