Will Thor succeed in dismantling the bomb that could wipe out the Gods?

The story of Thor's past, present and future selves continue with the second issue of this second arc in Thor's battle against the God butcher, Gorr. If you have been following this story then you know that the past version of Thor has been forced to construct a weapon that could lead to the destruction of all Gods, and now it is up to his present and future selves to eliminate that threat while young Thor is forced into slavery.

There's a very interesting scene at the start of this issue which draws the focus of the reader to young Thor and his refusal to abide by the orders bestowed upon him. In this scene, Thor meets his future grandchildren and the interaction between these characters is interesting. One of the cool things about this series is the decision to essentially eliminate the time stream. The result is that there are virtually no rules at all: Thor could potentially run into any character that is related to him or that exists in his universe and mythology, and writer Jason Aaron uses this moment to demonstrate exactly that. It's definitely an interesting idea and is presented in a way that may leave you with a desire to keep on reading this issue.

The art by Esad Ribic is definitely very pretty, and is one of the things that really makes thus issue stand out. His layouts are beautiful and the subtlety of the colors he uses for the comic are really fantastic. The result is a comic that is pretty and aesthetically enjoyable to read.

Although I personally found the plot of the issue and overall story to have its definite flaws, I have to admit I did enjoy the moments where Thor plays the hero in this issue. It's a great series of scenes that really increases the momentum of the story. There was a point where I felt I was at the edge of my seat really rooting for Thor, and I can thank the pages and panels leading up to those few moments for that sensation.

The concept of constructing a bomb that is capable of killing all Gods is a bit strange when Gorr can just as easily kill all the Gods himself (something he demonstrated he could do in nearly every issue of the previous arc of this series). Additionally, the fact that so many Gods are being crucified makes the point of creating a bomb somewhat moot. These Gods will die regardless, so what is the motivation for them to continue working on a project they know will ultimately kill them? They are damned if they succumb to being slaves, and damned if they try to fight against it. As a result, the plot here feels flawed and as a result, somewhat uninteresting.

The solution to eliminating the bomb feels a bit far-fetched as well. These Gods have been helping build this bomb for 900 years and now that it is nearly complete they have finally decided it is time to eliminate the bomb before its completion. The idea that they would wait so long is strange. What feels even more out of place is this idea that the Gods that have been building the bomb will somehow have a difficult time reaching it. It just feels as though there are a lot of inconsistencies with the general plot of this story and they seem to come to light in this issue.

Although the issue and the overall story does have its redeeming qualities (really pretty art and some moments of heightened excitement), it's hard to overlook the fact that the plot doesn't feel like it makes a whole lot of sense. Reading this issue I found it hard to believe that the Gods would agree to build a weapon that will ultimately be used against them. It just doesn't feel like it makes sense and I don't see the Gods in general waiting nearly 900 years, until the bomb is nearly complete, to commit an act of defiance in order to save themselves.

I still think that eliminating the timestream for the purpose of telling this story is interesting: the idea that you could have past, present and future versions of Thor all in one book and working together is interesting and it is something that keeps me coming back. Overall, however, I can't say I was really impressed with this issue and I don't really like the direction the plot had taken. 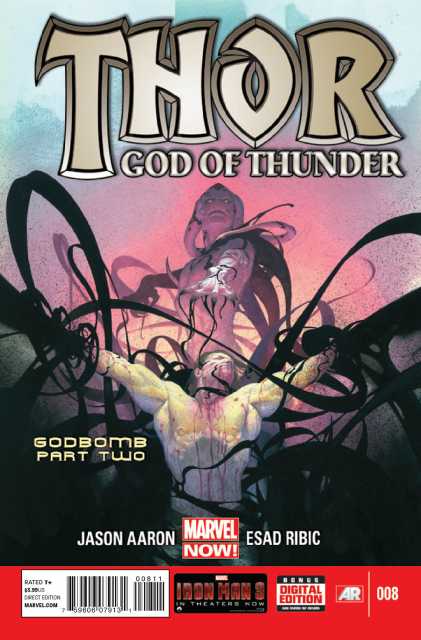