Thor: God of Thunder #7 - Godbomb: Part One of Five - Where Gods Go to Die

Thor teams up with Thor to take on The God Butcher!

It seems we are finally past the whole 'God Killer background story' stuff which I personally felt went on for one too many issues. Jason Aaron swiftly shifts the story seamlessly, giving it a whole new direction: something that was very much needed to maintain interest in this series. Now we are seeing Thor at different points in his own existence come together and converse regarding this adversary, and it is interesting (so far) seeing these different versions of himself come together to work towards a common goal. It's a great little nod to character evolution having the opportunity to see when they get along, what they disagree on and what things about Thor remain constant (like how he feels about time travel!).

One thing that impressed me was Jason Aaron's ability to capture Thor's voice even in his old age. Although he seems older and wiser, he is still very much the same. The language and dialogue used in the scenes where the two versions of Thor discuss what to do about Gorr sounds like Thor's character through and through, regardless of his age and the point in time he exists.

The story gets really interesting when the present-day Thor and Gorr have to face off, and we see the character struggle under Gorr's superiority, so to speak. It's a great scene and a really interesting series of panels that are very well illustrated.

Esad Ribic's pencils paired with Ive Svorcina's colors are just stunning. The inks are not as heavy in this issue, and the warm and cool tones in the colors really bring out the best in Ribic's work. Svorcina's colors set the mood and tone of the issue beautifully, and it is one of the qualities I enjoyed most about this issue.

Although there were definite things I enjoyed about this issue, there were a few things that definitely did not pique my interest. The first thing that I did not like was the scene where we are introduced to a young Thor, sleeping between two Shieldmaiden's. Now, this is fine, honestly, it's what Thor does: however the language in this scene came across as rather forced and that made the whole moment uninteresting.

The scene with Shadrak who we learn helps Gorr in his venture is rather silly. The dialogue is goofy and makes the whole scene uninteresting; it pulls the reader away from the more serious tone of the issue.

The ending is interesting and it really leaves readers with a crazy cliff-hanger. There were definitely some points in the story that were really great, and others that were something to be desired, but overall this is a solid issue. I was glad we moved away from Gorr's back story and are finally seeing the three versions of Thor interact with one another to serve a common goal -- this is something I was hoping to see happen and so far it has been neat seeing the character(s) work together.

There were certainly points in the dialogue that were great (Thor's conversations with himself) but other moments that were just not good at all (the start of the issue). Overall, the art was lovely and really complimented the story in this issue incredibly well. 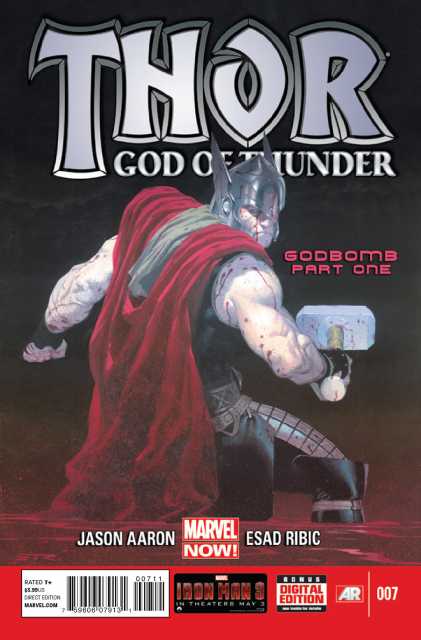