Thor: God of Thunder #23 - The Last Days of Midgard Part Five of Five: Blood of the Earth

Dario Agger takes action against Thor! Can the Son of Odin save Broxton from the evil CEO?

The Last Days of Midgard has attempted to test the God of Thunder in an all-new way, but this conclusion goes back to the basics. And what are the basics for Thor, you ask? Using his hammer to break the face of anyone who dares to harm Midgard, of course! While much of the epic action has been reserved for the future scenes in this story, this finale (not taking into account the upcoming aftermath issue) unleashes a ton of phenomenal action in the present. Thor's been pushed around and writer Jason Aaron has done a great job turning The Minotaur into such a despicable character. Well, he finally delivers a moment between the vile character and the Son of Odin that'll make you want to cheer. It's terrific to see Thor let loose again -- he's certainly earned the right to go a little wild. It's also fantastic to see Roz Solomon step up! We now have a fine understanding of her personality, so it's cool to see her put into this dangerous situation. Not only does she thrive, but she has a legitimately awesome moment or two! I wonder if a bit of her dialogue was a slight nod to The Lord of the Rings.

Somehow, Aaron is able to keep up the epciness and once again delivers a stunning course of events in the future. Atli's absolutely hilarious and even though her lines will make you laugh out loud, her remarks never take away from the grand tone. Honestly, "grand" isn't even doing the future scenes justice. This clash of titans is something that'll drop your jaw (which is something this book does frequently) and ends on an especially strong note.

Artist Esad Ribic and colorist Ive Svorcina continue to amaze. Aaron's script is consistently large in scope and these two constantly deliver on all of the spectacle. The future scenes feel larger than life and you can fully appreciate all of the enormous hits. The shading and emphasis on darker tones also help immerse us in this bleak future. These two really do go above and beyond to make everything feel magnificent. There's a series of panels (Thor's first punch) that's pure comedy gold. We've been waiting for that to happen and man, the way it's handled is great! And then there's Agustin Alessio's phenomenal cover. It does a thoroughly cool job merging the two stories.

I'm left with a few questions, but it looks like they'll be addressed in the next issue. So, no major gripes here!

This chapter is loaded with explosive action and it's an issue that's both spectacular and cheerworthy. You can really tell this is a passion project for the creative team and the quality remains stellar. Aaron's cast is full of amusing banter, the action is magnificent, and the contrast between the two tales is excellent. I won't spoil the ending, but it once again provides a great contrast between the two eras. Aaron's work with this book is seriously impressive, and, luckily for us, he has a talented art team bringing it all to life. Ribic and Svorcina do a tremendous job making sure the visuals live up to everything the script has to offer and then some. Simply put, The Last Days of Midgard is an amazing ride and I just can't recommend it enough to every Marvel fan. 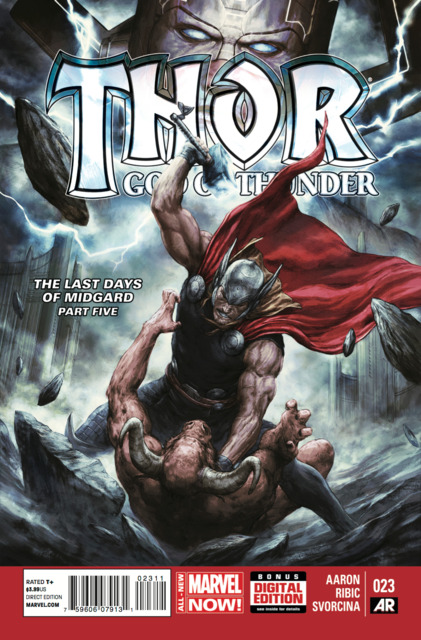