Thor #8 - The Woman Beneath The Mask

The new Thor's identity is revealed at last.

There's nothing like a good mystery. In comics, when we have a main character or villain with a secret identity that not even the readers know, it adds to the suspense of the storytelling. We've been wondering since last October who could be wielding the power of Thor. Jason Aaron has crafted a nice mystery. There's been some clues and red herrings to keep us guessing. It's likely you may have heard who the new Thor is before you had a chance to read this issue. That's the nature of these sort of things with the occasional leaks and people trying to spoil things. Marvel decided to put it out there before it was released through other means. If you want to know and haven't heard yet, you can read about HERE.

The reveal of the identity isn't the only focus of this issue. With Odin's outrage at not knowing the identity, he unleashed the Destroyer upon the new Thor to try to retrieve Mjolnir and to find out. Odinson (the former Thor) and his mother decided to go against the All Father and brought some back up--all the women Odinson suspected as being this new Thor. It's a pretty spectacular battle, courtesy of Russell Dauterman's art and Matthew Wilson's colors.

The battle is a great way to introduce this new Thor to more of the Marvel Universe characters. We've already seen a few different stories with Thor part of the Avengers but we haven't seen that moment happen within these pages. There will be some consequences as well with Odinson and Freya going against Odin. And there's also the matter of whether or not Odinson finds out Thor's identity or if it's just for us readers.

This was a good issue but it felt like it was mainly about filling up some pages with some great fight scenes. It would have been interesting (but not necessary) to see how Odinson convinced these particular women to join in this fight. I suppose there weren't any other characters or members of teams they may be on that were around and Odinson felt it important to only bring these individuals along.

I'm okay with the reveal. I'm curious to see how it plays out. I love the misdirect in recent issues. It is unfortunate I found out before being able to read this issue but, again, that's understandable and doesn't impact the rating of this issue. Although, it would likely have made the reveal more suspenseful.

The answer is finally out but the story is not over yet. Jason Aaron has carefully laid out the groundwork for this mystery. There may have been clues and signs along with some misdirects but now readers can digest the information for themselves. There is still more to discover with this character in this role. There will be some consequences from the actions in this issue and now we have to patiently wait for the next issue to see where things go from here. Russell Dauterman's art and Mathew Wilson's colors are fantastic. There is a lot of fighting and it looks great but it felt like it was mainly to fill some time until we get to the moment between the new Thor and Odinson. Regardless, the more I read of this new Thor, the more fascinated I become. Now with the revelation out of the way, we can focus on what this all means and where Jason Aaron is going to take the story next. This book is a blast to read. 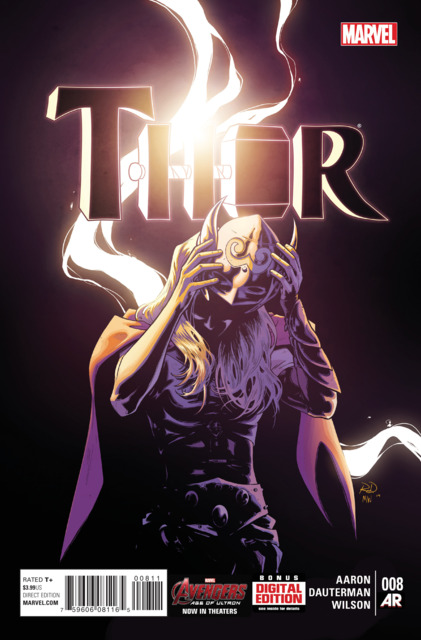