The insane goodness of this series continues to tell the story fans of the show have been waiting for. Check out who's on the cover!

Last issue we saw the return of the Lone Gunmen. With what happened to them in the show, it was quite a surprise. On top of that surprise, we also got another huge one at the end of the issue and seen on the cover of this one. The Cigarette Smoking Man is back! If you were a fan of the show, you know how shocking that is. (Spoiler: he died in the show, but hey, this is comics, right?).

Chris Carter and Joe Harris have been spoiling fans of The X-Files. We've been seeing so many favorite characters return...only not all of them seem to headed in the best or safest directions.

As the mystery around Scully's son continues, we're seeing more of the mysterious group responsible for the current problems. Those associated with the X-Files in the past are being affected as well and you simply get a feel as if this is all building towards an explosive finale (and we're only on the third issue!).

Of course the highlight here is the appearance of the Cigarette Smoking Man (or Cancer Man if you prefer). With each issue, we clearly get the picture that there is so much more to these characters. The show may have ended back in 2002 but the story is (thankfully) far from over.

Michael Walsh's art continues to set up the tone and vibe as we move forward in the X-Files universe. It's great seeing a character from the show turn up (like Agent Monica Reyes) and immediately be able to recognize who they are.

With each issue I have to struggle from geeking out over all the cool things happening.

It does help if you're familiar with the show in order to fully appreciate this series.

If you've ever watched an episode of The X-Files, this series is a must-read. Series creator Chris Carter and Joe Harris have brought the characters back with a vengeance. We're seeing many familiar characters return (some in shocking ways) and the story continues to build the excitement with each issue. Michael Walsh has captured the essence of the characters and is bringing them to life along with plenty of X-Files action that we would expect. Bottom line, if you enjoyed the show, you're going to love this comic. Don't miss out on it. 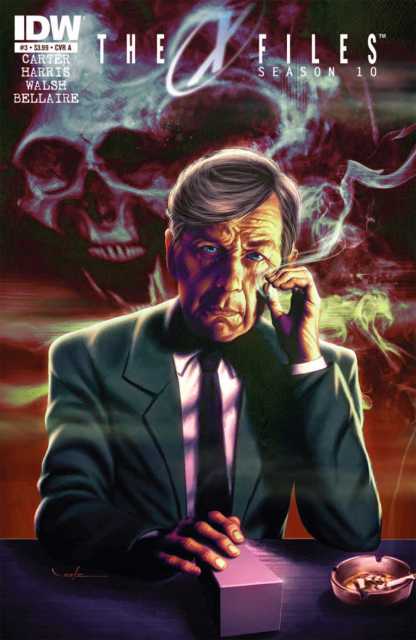