The veneer peels back further as the people trapped in the mysterious house feel their minds straining under its spell.

We’re rounding the corner to the end of Geralt’s tale. He and his companion must hasten back to the house, only to find the mysterious Marta being a rather poor hostess to her poor husband. Things deteriorate quickly as Jakob is distracted by a touching, if not altogether HONEST story of Geralt’s lost “love” (and for anyone familiar with the Witcher’s source material, it’s neither Triss nor Yennefer) and the group becomes separated yet again, only for the house to change architecture yet again and seemingly lead Geralt to his destination. Paul Tobin does a generally great job of capturing the voice of the titular witcher: gruff, to-the-point, witty and direct to the point of rudeness but not without charm nor compassion. Witchers have a reputation for being emotionless, but this issue proves that merely a rumor in a few different ways. The supporting cast, as well, get great moments from Jakob’s conflicting desires to stay and leave, both forever, to the succubus’ curiosity and odd sense of whimsy. This is a tremendously well-written bottle story, particularly in its methods of keeping the cast from leaving the “bottle” while spicing it up with some great horror motifs and moments. And anything that impacts perception, mind and memory are personal favorites of mine when it comes to horror, and this story is delivering on all of the above.

Joe Querio handles the art and, like the writing, he’s generally amazing at it. Particularly since his is the only credit for it, and that never fails to impress me. The visuals are distinct when they need to be, but dark and murky much of the time, adding to the tone of confusion and creeping terror. There’s not much action, which follows as this is far more about the mind than the body, but what there is is well staged, moving seamlessly from one panel to the next, always easy to follow. What’s far more impressive is Querio’s ability to have the lengthy walking and conversational portions be just as interesting and engaging, in fact moreso in many cases, and using that to set the tenor of the issue just as effectively.

Writing the Witcher universe seems like one of the hardest assingments I can imagine. This isn’t a world of thees and thous, it’s shockingly modern and yet still rooted firmly in a fictional, fantastical past. Nowhere does this become more apparent than with Geralt, who puts on airs for no one but, as a result, sometimes comes off sounding far, far more modern in his dialog than he should. His companion likewise lets slip a few idioms that are far too current, even for this mish-mash of styles.

The art, likewise, succeeds far, far more than it fails, but there are occasions when characters look stilted or stunted, particularly one panel of a woman in Geralt’s story who I thought had some kind of deformity because of her design in one panel.

This is an absolutely great addition to the Witcher mythos, and with the most recent English translated novel marred by a dicey translation, it’s easily my highest recommendation to fans of Geralt who need to get a quick, easy fix. The writing and art might stumble occasionally, but the flaws are far from ruined and vastly eclipsed by the issue’s strengths. This book perfectly sets up a tense finale that I already can’t wait to read. 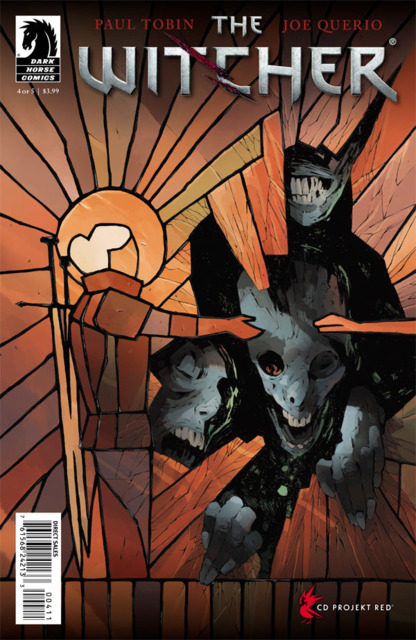