We've seen the future world in THE WAKE but from the very first pages, Snyder and Murphy show us there is much much more than we thought about.

We usually start out our reviews with what we really liked about an issue. I have to start with something I don't like. I do not like that there's only three more issues after this. It was mind boggling having the series jump forward 200 years (even though we sort of knew it had to happen eventually) but we're not just getting a quick glimpse at this future world. Last issue we saw hints over how big the world is with glimpses at different people and factions. Within the first few pages, it's like you're smacked in the face (in a loving way) with how much other history there is for these characters.

What it comes down to is, you'll want to see more. I actually found myself reading the issue slower and slower in order for it to last longer. You can tell Scott Snyder isn't writing a simple short ten-issue miniseries. Along the way, he's busy fleshing out the entire world at different moments in time. There's such a feeling of so much we could still see.

Sean Murphy's art is phenomenal. With Matt Hollingsworth's colors, this is such a gorgeous book. You can feel what the characters are feeling by looking at them. When the action kicks in, you'll feel like you're looking at a major Hollywood blockbuster. I can't help but feel it's a little cruel that this is only a miniseries.

I think I've already said it. The fact that this is only ten issues and there's only three left is a major bummer.

There's so much to see in the latest issue of THE WAKE. Scott Snyder, Sean Murphy, and Matt Hollingsworth are packing it all into these issues. With the slightest hints, we can feel just how big this comic world is and have to wonder how much detail Snyder and Murphy have laid out in their notes. It's crazy to think there are people out there that haven't read this series yet. I have to say I envy them for the fact that they will be able to enjoy all the issues for the first time still. I don't want this series to end but I cannot wait for the next issue.

@g_man: Hey, maybe at the end of this, they can both be persuaded to come back to this world in a little while. We could beg and snivel though I think gunpoint would be more effective (I kid). Thoughts?

Definitely a contender for pick of the week. What an ending.

That ending is a trip. I certainly didn't see that coming. This book is just crazy, in the best way.

@mcbean: I agree, I think American Vampire is his strongest work. But I'm digging the Wake quite a bit.

I absolutely love this series, but it's starting to get a bit fast...it really should be more than 10 issues.

@akindoodle: I think Tony mentioned one of the recent podcasts while talking about the issue before the one here reviewed, that Snyder, when Tony ask him about possibly returning to the series, expressed interest but that he didn't have any set plans for it. I think that's a pretty hopeful thing!

@xxheavyrainxx: Where there is HOPE! ....

Definitely a contender for pick of the week. What an ending.

Agreed. I love this series. I literally cannot understand why that guy thinks it "sucks" I am so enthralled by this world.

@savagedragon: I wish this was an ongoing.

This is a very interesting series but this issue was a little uninteresting. They should of just added this to another issue..I felt a little robbed with the plot progression. 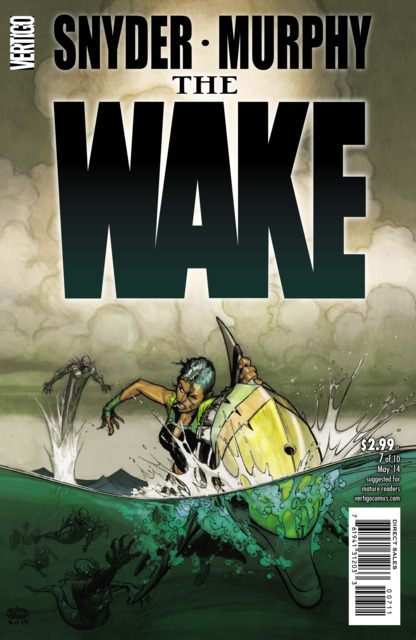