It's the explosive final issue. Get ready for some answers that you didn't see coming.

Scott Snyder and Sean Murphy have given us an amazing story. We've been introduced to a new world that has had layer upon layer. The fact that it ventured across different time periods gave it an even bigger feeling.

As the story heads towards the conclusion, there's a lot at risk for our main character, Leeward. It's these types of stories, ones with a definite ending, that you truly don't know who is safe and who might perish. The action has been set up in a big way and there are plenty of payout moments. It's not just action as we get answers. This is a series that has had us scratching our heads at times. These answers open up more doors and really brings about the desire to see more of this world.

As fascinating as the story is, Sean Murphy's art is just so good. This is one of those situations where I couldn't imagine this story drawn by someone else. Murphy and Snyder do wonders together and we can only hope to see the two team up on another project in the future.

It's such a bummer to see this series end. Yes, we knew from the beginning it was meant to be a ten-issue miniseries. That still didn't prepare us for that moment of sadness when reaching the final page. Thankfully, the story overall is really great. That makes it a little easier.

Scott Snyder and Sean Murphy's THE WAKE has come to an end. This is the sort of book you'll want to read over and over. There is an interesting feeling reading a comic with a finite pace. That still doesn't quell the desire to see more from this amazing new comic world. Snyder and Murphy make a phenomenal team. We've had an amazing story, we get plenty of answers, and Murphy's art is enough to make you drool. Hopefully we will see more from this world in the future. There's plenty more in to explore in this world. Bravo to Snyder and Murphy. 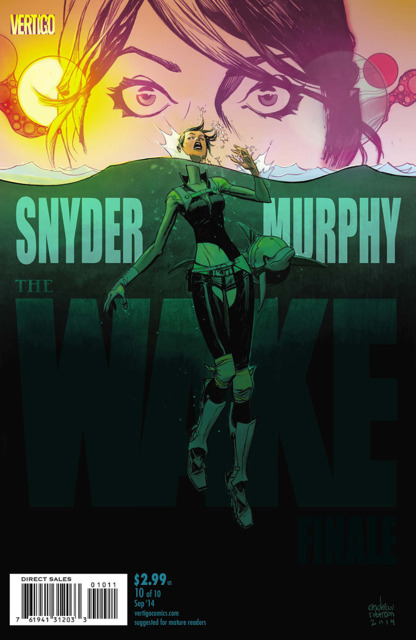