Gilad and his allies attempt to bring down the Immortal Enemy.

Co-writers Matt Kindt and Jeff Lemire's third chapter of THE VALIANT is basically split between two scenes: a giant battle with the Immortal Enemy and Bloodshot attempting to keep Geomancer safe. Technically, there's a third one surrounding the "WHAT'S IN THE BOX?" mystery, but that doesn't get nearly as much focus. That'll of course change once we find out what kind of plot device is lurking in the device. Anyway, both of these scenes leave a strong impression and obviously they thrive for totally different reasons.

The giant battle may play out in a pretty predictable way, but the scene gives Paolo (and Joe) Rivera a chance to unleash some impressive visuals. This conflict is packed and it's full of fan service. Considering there's a double-page spread and a splash page, it's impressive how none of these moments feel rushed and both of those pages are sure to keep you gazing. These bits are all about big attacks and the joy of seeing all of these characters gathered in one spot and the experience absolutely delivers. The battle may not have any real jaw-droppers, but it sure is great to look at.

The scenes with Bloodshot and Kay are easily the strongest in the issue. Now, I know that's hard to believe since this chapter also includes a giant brawl with a ton of familiar faces, but the dynamic drew loose parallels to the bonding scenes between John and the Terminator back in Terminator 2: Judgment Day. The co-writers are doing a great job making the Geomancer relatable and our window to this crazy world. Sure, the stuff that's going on seems surreal and she has powers, but her personality makes it all feel more grounded. I didn't expect to laugh when going into this issue, but their conversations made me crack up at least twice. Yeah, this seems like a way to get a little more exposition out there about Bloodshot for new readers, but I don't mind when they handle it in such an entertaining and witty way. It was interesting and informative.

As much as I love the idea of all of Valiant's characters going up against the big bad, this didn't really pull any surprises and basically played out how many of you will predict. Sure, it looks awesome and it's entertaining, but it's a little surprising that the issue's highlight is two characters bonding and not a ginormous and epic battle. Also -- and this is a minor point -- it's a little odd the team couldn't recover all that quickly since they were aware of what the Immortal Enemy could do to them and Kay and Ninjak shrugged it off in the last issue.

Personal complaint (doesn't impact score): I'd like to see Gilad get a little more love. I'm happy they show off his abilities as a tactician, but it seems like he doesn't receive as much insight as the others even though this is a huge story for him.

Fun action? Check. Well-written conversations? Check. Visuals that make you want to keep staring at the pages? Yeah, another check. THE VALIANT #3 offers a bunch of fan service and big action while also delivering on personality. And the best part of all? It all looks excellent. THE VALIANT is awesome and it deserves your attention, people. Seriously, unless you're completely against the idea of superhero comics, you should give it a shot. It'll be your proper introduction to this universe.

I was pretty underwhelmed by the big showdown too. Thought the Kay and Bloodshot stuff was really good. Makes me even more excited for Bloodshot: Reborn.

I can't wait to see how Gilad gets downplayed again.

I think i am making this my final book to collect

@allstarsuperman: Do I need to read any other book to read this series?

No you don't need to read anything prior. But this is only a 4 issue miniseries. I'd suggest jumping on Unity with issue 15 instead. I believe 15 came out this week

I like how everyone struggles with writing Gilad. He is as harmless as the Lorax it seems.

Drat, my regular shop sold out yesterday, going to have make a special trip to get this.

It was cool to see everyone there; but functionally, how did they get Punk Mambo on board? Who the hell even KNOWS about her in universe?

I did think it was interesting that Shadowman wasn't there considering where we last saw him... Like, that was a good attention to continuity but Punk Mambo was weird.

I like her character; it's just that in context, there's no logical reason she should be there. She's way off the grid, the government should not have her in the registry of people to call for an emergency and I doubt she'd heed it if they did.

I like her character; it's just that in context, there's no logical reason she should be there. She's way off the grid, the government should not have her in the registry of people to call for an emergency and I doubt she'd heed it if they did.

I completely agree, which is why I thought her worst fear was hilarious. Probably Valiant's way of trying to generate some interest for their characters. I can't imagine what she could have done either. Still, it was worth it to get to see a cute, little voodoo doll of her. (:P) 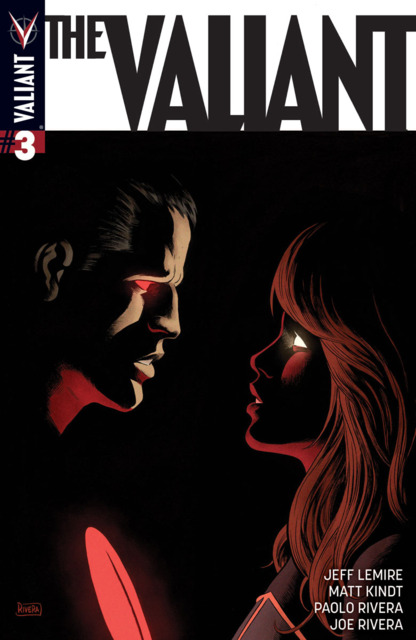