Great Lakes Avengers was a book near and dear to many fans hearts and one of its premiere characters, Squirrel Girl, became the highlight of that team, probably after she beat Thanos on her own. Years later, fans finally get to see this character in her own series, which is the most over-the-top and ridiculous book Marvel currently offers, and that is meant in the best way possible.

Squirrel Girl is a silly character, on paper, but that's not a diss on her. It's who she is and writer Ryan North, artist Erica Henderson, and colorist Rico Renzi really embrace that idea and turn it up to 11. The opening, alone, of this issue sets the tone of the entire series. Squirrel Girl takes down some criminals in a park while singing the song "Squirrel Girl," which goes to the classic tune "Spider-Man." Right off the bat, you know she means business because she has her own sweet theme song.

The fun never really stops here as Squirrel Girl creates an alter-ego, so her loved ones don't get hurt because of all of her crime fighting. The way she makes these logic jumps as to why she needs a secret identity is pretty dang comical because her loved ones seem to be just the squirrels. She's also not acclimated well when it comes to acting like a normal person without super-powers. Time and time again, she forgets regular folks don't have super-strength nor can they talk to animals. We really get a great feel for this character in this first issue and it actually comes off as a great starting point for new readers, even though Squirrel Girl has become a cult hit with fans and her character has been buried in limited series or team books few people read.

What's most intriguing about this book is that it's really geared towards all ages. While a man in his early 30s (that's me!) can enjoy what's going on in this book, so could a young girl or boy, even someone the age of 5 or 6 could get a pretty big kick out of this. The dialogue fits that all ages scheme, but it has a lot of jokes that play to all audiences. Most importantly, Henderson and Renzi artistically create this book to also have that wide range of appeal. The art really pops off the page and it's bright, keeping the reader fully engaged in this very animated style of book. Lastly, North gives this first issue a story with a heavy moral at the end where Squirrel Girl discovers that sometimes, talking to someone is a better way to resolve an issue that fighting. Maybe I'm reading way too into all of this, but this is a book that could easily sit on the main shelf at your LCS or on the kids' rack

The single panel for the preview of the next issue has me super-pumped.

If you don't have a sense of humor and can't find a way to enjoy a book geared more towards all ages, then you won't enjoy this.

Expectations were pretty high for this first issue but THE UNBEATABLE SQUIRREL GIRL exceeds them. North, Henderson, and Renzi have put together something that appeals to both young and old that is an incredible amount of fun, featuring a great, stand-out star, who at times isn't all there. The first issue delivers the direction for the series, gives readers some action, and develops the character all in a one-two punch that doesn't feel like an information dump. This is a book you're going to want to check out especially if you like to read something that borders on the silly. I highly recommend this issue. 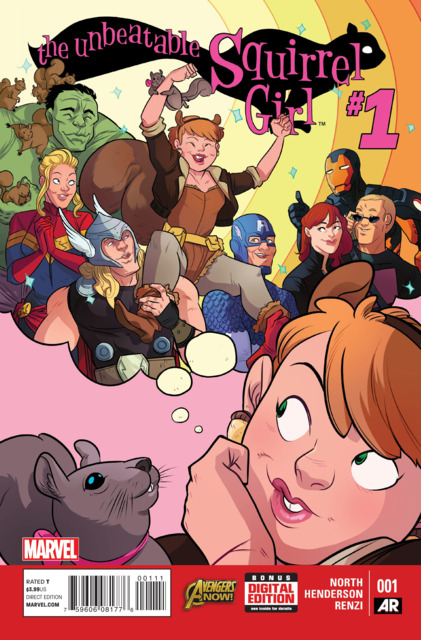