Now that the Ultimates have fixed Galactus, what's next for them?

In case you missed it, in issue #2, this new team of Ultimates turned Galactus into a life bringer. He's restored life to a dead planet and now off restoring balance to the universe. In issue #3, the team comes together to figure out their next mission. However, the Shi'ar Imperial Guard isn't too happy about what happened with Galactus.

Blue Marvel has decided that the universe has too many problems with time, with people travelling throughout it and rewriting history. Damage has been done to the universe but they don't know to what extent, so the Ultimates have to travel to outside the universe just to see how bad it is.

This issue is 95% setup and people sitting around talking, but it's done in such a way that it's one of the most exciting books of the week. THE ULTIMATES takes some of the more intelligent and higher concept elements from the Marvel Universe and makes it a bit more accessible to the everyday reader. I'm not saying anything is dumbed down in this issue, but writer Al Ewing does an exceptional job at explaining all these concepts in a way that really brings the reader into the world and at no point does the information feel like it's being dumped on the reader. It fits well within the story being presented.

The issue also really delivers more personality from each of the teammates. We're really getting to know who these characters are and what role they play on the team. Aside from Carol Danvers and Black Panther, this team is made up of B & C-List Marvel heroes. The team works well as a cohesive unit and we even get to see a cameo from the new Giant Man, Raz Malhotra. There's also the return of an arch-nemesis to look forward to as well.

Kenneth Rocafort and Dan Brown are doing some outstanding art on this book. Rocafort's page setups and panel placements are unique and give this book a look and design that fits the higher concept subjects this book delivers. On top of that, Rocafort's art is simply wonderful and his style is very fitting for these characters. Brown's colorwork is top notch and really fleshes out the book. I epsecially loved his colorwork on the borders of the panels as well.

THE ULTIMATES continues to be one of the best books in the post-SECRET WARS world, right next to VISION. Conceptually, this is a brilliant book and makes the team name "The Ultimates" mean something again. I cannot recommend this book enough. 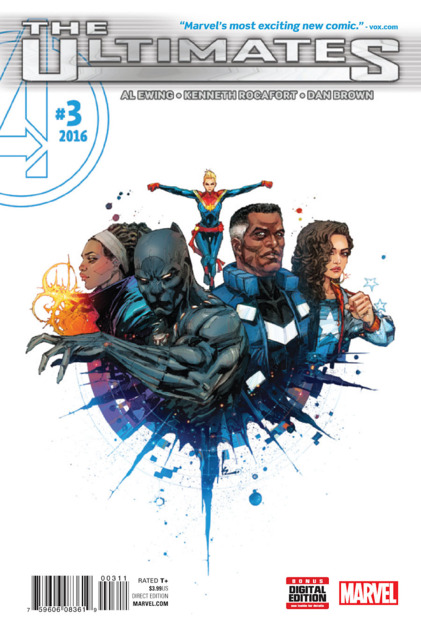