Ultimates #1 - Start With the Impossible

A new team comes together to face the universe's greatest challenges.

First thing is first, this team doesn't have anything to do, that we know of, with the 1610 Ultimates. However, the concept of what the Ultimates stands for is still there. The Ultimates originally came together to stop larger forces that just one of them couldn't stop. This is really what this new team of Ultimates is all about, but instead of sitting back and waiting for things to become a threat, they search out the known threats, in order to stop them before they become a problem.

On top of that, this group consists of a few mid-level characters that don't get a lot of page time, and just as importantly, there are no ties to the American government, which seems to be a problem for a few groups at Marvel in the past. Although, there are ties to Wakanda, considering Black Panther is a part of the team.

So this new team is off to end potential problems before they start which brings the team up against a slew of cosmic forces as the first issue expands what feels like a more sinister part of the cosmic universe at Marvel. And by the end of the issue, they meet one of the universe's most infamous threats: Galactus. As far as a first issue goes, I really like what Al Ewing doing with this opening issue. It's different and it's nice to see some of these characters get some "screen time."

On the down side of things, it is a pretty confusing and mildly rocky start. A lot is thrown at the reader in the opening pages and it's a bit of a turn-off for the book. It's a bit of an information dump. Luckily, everything kicks right back into gear afterwards.

Joining Al Ewing is the art team of Kenneth Rocafort and colorist Dan Brown. The art on this issue is outstanding and refreshing. Rocafort's art really makes this book pop and it gives it the futuristic look that the story requires, since they are using a lot of super-science and Wakandan technology. Scenes are large and vast and some of the establishing shots here are wonderful. Brown makes the characters really pop off the page with his colors as well and that final page looks wonderful.

THE ULTIMATES may not be the book fans of the 1610 Universe expected, but it is easily worth the read. This is a pretty cool concept which places heroes on the offensive, so they can save the Earth in the future. It's a very different but very cool book. However, the opening is a bit of an info dump that can be a bit overwhelming. Regardless, this was a great first issue and I highly recommend checking it out. 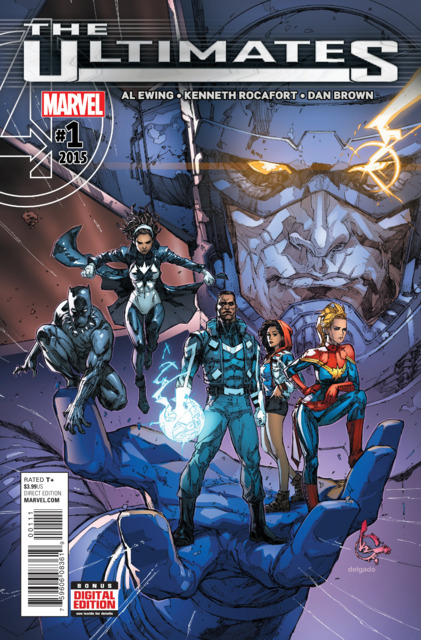