The pilot for Amazon's The Tick takes the well-known comic franchise and adapts it, yet again, for television. The new series stars Peter Serafinowicz (Guardians of the Galaxy) as the titular character and Griffin Newman (Vinyl) as his trusty sidekick Arthur. The new show may have what it takes to get renewed, even though it feels like a leap away from the source material.

The pilot follows Arthur Everest, the eventual sidekick of The Tick. Arthur's father was killed by a crashing space ship, which was taken down by the super villain The Terror. Arthur becomes obsessed with finding this villain, who is long-thought to be dead, and the character's search leads him to meet The Tick. The show follows a very traditional hero's journey plot line, which is mildly predictable at times, but the humor keeps the episode feeling fresh.

For a show called The Tick, it is almost entirely centered around Arthur, which is a bit of a letdown considering that the titular character is so entertaining. However, as we follow Arthur, the show seems to present numerous underlying ideas and theories, which makes it more complex. Arthur is a disturbed individual. He's obsessed, neurotic, and completely driven by his personal history. Compared to the other two adaptations we've seen of the character in the past, Arthur is more fleshed out and is truly is a great driving force for the show. Newman's portrayal of the character isn't a hit right off the bat, but it grows on you as the episode progresses.

Serafinowicz fills the role of The Tick terrifically. He grasps the character's voice exceptionally well. He's boisterous, long-winded, and feels like he doesn't fit in Arthur's world at all, which creates an interesting dynamic we've seen with these two time and time again. He really plays the "well-intention buffoon" brilliantly.

We catch a brief glimpse of a villain from yesteryear: The Terror. Jackie Earle Haley (Watchmen, Preacher) delivers a brief but memorable performance as a super villain who haunts Arthur's past. He's over-the-top and bizarre but a nice comic relief for a very somber moment for one of the show's stars. If this show gets picked up, this is a character they should explore further.

One of the things that isn't working for The Tick is the fact his costume is pretty terrible, and it all has to do with the mask. Without getting too in-depth with what worked or didn't work in previous incarnations, the mask really kills the whole costume. The eyes and nose not being covered doesn't resemble either the animated or original live-action series, which is fine. However, it makes it feel cheap. The suit looks strange, as a mixture of human musculature with an almost exo-skeleton look to it, but it's cohesive, all the way up to the mask, and it's something that grows on the audience as the show moves forward. Regardless, this does allow Serafinowicz to emote more through his face and eyes, which he can deliver almost a childlike wonderment when he speaks, so it's a bit of a double-edged sword.

Another issue with the pilot episode is that it takes too long to get started. Like many pilots, the audience has to be introduced to the world and the characters that inhabit it, and with The Tick, 29 minutes are allotted to get the viewer acquainted with this reality which is very much like our own, if we had over-the-top, moronic, super-powered beings running amuck.

The audience spends the first 18 minutes in culture shock, trying to piece together just how this world works. If everything is so serious, how do these nonsensical super-humans fit into all of this? During the animated series and even the live-action show from Fox, it was easier to accept the concept because both shows were so cartoonish. However, the Pilot Season show is more grounded and much more in line with the tone of the DC Cinematic Universe, with a more coherent plot and a heart. The good news is that everything starts to come together and flow exceptionally well right as the episode ends. If anything, the best thing the episode accomplishes is making the audience want more.

The Tick is a slow burn and doesn't really start to deliver until the final nine minutes of the episode. However, we can see what the team behind the show is trying to do. There's potential here for something entertaining and very different than what we're accustomed to. While the world is serious and gritty, the dialogue is from another world, and that's the endearing thing about this opening episode. It won't live up to the animated series for fans, but they're trying something different, and it is ambitious. It's an episode that may leave a bit of a sour taste in many people's mouths; however, in hindsight, it's a pilot that has a lot of legs, and it could easily work as a solid series, so while the opening offering may be bizarre and bland, it's a show Amazon should pick up. 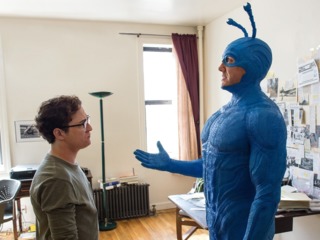