The Tick and Arthur are back. Someone's stolen The City. Yes, the ENTIRE City is gone.

The Tick and Arthur are back. Sort of. When THE TICK first came out, I was a HUGE fan. I loved everything Ben Edlund did. We had wacky and zany stories with over the top fun and action. Seeing the duo back in this Free Comic Book Day issue.

The main story is written by Jeff McClelland. The Tick and Arthur are eating just outside The City when a bright light catches their attention. The entire city is gone. This leads to the two heading out into space, courtesy of an alien that works for The Horader. Yes, an intergalactic space hoarder has taken the city and the Tick and Arthur need to get it back. Wacky adventures ensue.

The hardest thing for me in TICK comics these days (and the past several years) is the absence of Edlund. Duane Redhead's art does a good job capturing the feel for the most part. What really brought a smile to my face was seeing a certain mark on the moon left by the Tick's enemy, Chairface Chippendale.

The twenty-four page story is followed up by a three-page back up written by McClelland with art by Ian Chase Nichols.

I hate to say it but it's mainly the absence of Ben Edlund that makes it difficult for me to read TICK comics. For me, the bar has been set incredibly high and not many have been able to come close. We have a fun and wacky story but it still feels like it's missing something. This is the first TICK comic I've read in years because of this. It is enjoyable. Casual readers will have no problem getting into this story with some of the commentary being made in fun. If you have a problem accepting others writing and drawing the Tick, that's where it gets a little harder.

The back up story was just...weird. I know TICK stories are often pretty strange but this just didn't work for me. Part of it was the super-short length. Arthur looked a little weird (I know, artistic interpretation and all that). I just didn't see the point of the story and the ending left me scratching my head.

It's always great to see THE TICK in comics. I'll admit, I haven't read a TICK comic in years because of my stubbornness in the absence of Ben Edlund actually writing and drawing the comics. We do get a fun story here that's fitting for the character. If you're a less strict TICK fan, you'll have no problem enjoying the tale as long as you have an idea what the Tick is all about. 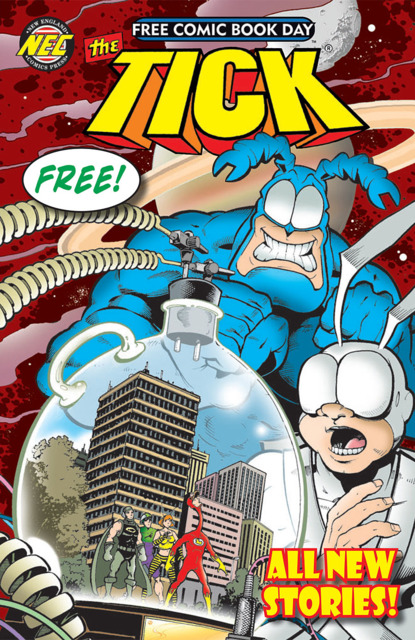