SpOck is back! Sort of. This is where we find out what happened and where he went in issue #19.

Doc Ock's tenure in Peter Parker's body might be over but there's still an adventure left to see. Back when Spider-Man 2099 went into his past, we saw SpOck momentarily disappear. He came back with his costume in tatters and in mid-sentence. "--I'll find a way! You haven't heard the last of Doctor--what?!" We've been wondering what happened that he was about to (possibly) reveal himself. Now we get to see where he went.

It's no secret he ends up in the future. As SpOck puts it, it's the universe's way to balance things. With Miguel O'Hara in the present, SpOck ends up in the year 2099. With his intellect and the technology he's able to track down, he works out a way to try to escape the future. What's interesting is this isn't just a continuation of SpOck's story, it's also laying out the groundwork for SPIDER-VERSE. Spider-Men across the multiverse are being hunted and SpOck becomes a witness to this. Still with his newfound heroic nature, he's determined to get himself involved. Dan Slott and Christos Gage are heating things up.

Giuseppe Camuncoli's art brings us back to the series we knew, except the environment is way different. Camuncoli is not only tasked with drawing the 2099 world but he also has to depict some of the other parts of the Spider-Verse. Of course, he handles it all with ease, giving us loads of detail. It's always fun seeing alternate worlds and versions of characters.

If that wasn't enough, we also get an eight-page back up continuing SpOck's adventures in other worlds with art by Adam Kubert, written solely by Gage.

We know Otto Octavius is/was a smart guy. It feels like a stretch how easily he adjust to being in the future and the ease he uses the futuristic technology. His goal is to use his intellect and the tech to return home. Because it's not clear how long he had to actually study the tech, it feels like he easily puts it all together to create a device that allows him to travel through time and to other dimensions. Pretty impressive for a guy that has always been defeated in the past. When he encounters the different parallel timelines, it doesn't phase him one bit.

SPIDER-VERSE is shaping up to be an interesting story but it's a little unfortunate that this final SUPERIOR Spidey story is setting that up rather than sit on its own. It could be a matter of how much time did Doc Ock spend on this adventure. We know he was only gone 24 hours in the present (even though issue #19 says he was gone nine hours) but that doesn't mean he wasn't gone for a week, a month, or whatever while traveling through time and parallel worlds. Let's hope we get enough of SpOck's return here, next issue, and in SPIDER-VERSE.

Doc Ock is back as the SUPERIOR Spider-Man. He hasn't been gone long but he has been missed. Now we get to find out what happened when he disappeared during issue #19. Not only does this issue start off SpOck's final adventures as Spidey, it also sets things up for SPIDER-VERSE. You get a sense of how big this story will be and seeing Ock involved is pretty cool. Dan Slott and Christos Gage have their hands full with Doc Ock's return and we get some cool art by Giuseppe Camuncoli and Adam Kubert. It would have been nice to see SpOck focus more on his own adventure but the set up for SPIDER-VERSE makes this something Spider-Man readers won't want to miss. 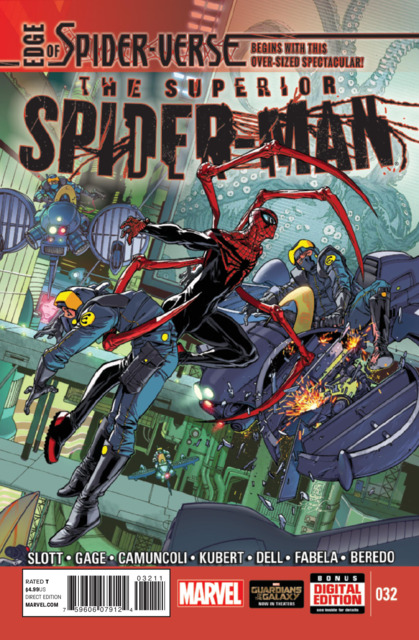