The Superior Foes of Spider-Man #13 - Supposed To Be Art

Shocker and the head of Silvermane are on the run from Hammerhead!

Every month, SUPERIOR FOES OF SPIDER-MAN provides a comedic look at super-heroes and team books without shoving parody down the readers throats. It's the villain book with a heart of gold. However, said heart of gold may soon be stolen.

The past few issues have the team a bit more split up, which has been working well for the book. We're seeing a bit more of the other characters being a bit more developed, since the primary focus of this series has been on Boomerang. It's easy to fall in love with the character in this series. The opening scene of this issue is easily my favorite as we see Mach VII shopping for furniture, before he gets the call to be a hero. The thing is, Mach VII's outfit takes up a lot of space: hilarity ensues. What makes this scene such an awesome piece is the four panels of Mach VII moving around the story. Writer Nick Spencer, and artist Steve Lieber hit these small beats perfectly. This is how you do comedy in a comic book.

Another large piece of this book is Shocker on the run from Hammerhead and company, while Shocker keeps the head of Silvermane in an old bowling bag, which we find out is "kinda comfy." The back and forth between Silvermane and Shocker is fantastic. Spencer does a great job with the dialogue and giving each character a distinctive voice. Silvermane has become this reluctant father-figure for Shocker as well, but this relationship still holds that Odd Couple feeling to it.

Steve Lieber's art is one aspect of this book that keeps me coming back. His style is so fitting for the story and the tone, and with Rachelle Rosenberg doing some great color work that really fits the style of this book, the art couldn't compliment Spencer's writing enough (and vice verse). Rosenberg's art isn't completely flat. It's a step above and while saying the colors are simplistic could be seen as insulting, her work is a great mesh. SUPERIOR FOES' creative team is unstoppable when together.

It feels like SUPERIOR FOES OF SPIDER-MAN has lost a bit of its flavor in this issue. It's slowly becoming more serious and isn't as enjoyable as its been in the past. Don't get me wrong, the book is still funny and a blast to read, but this issue in particular seems to be moving towards a more serious storytelling format. Yes, we're aware Shocker is still carrying around Silvermane's head in a bowling bag, which he takes naps in.

SUPERIOR FOES takes the idea of a team book and flips it on its head. It's filled with villains, for all intents and purposes, are utter failures at almost everything they do, without coming off like an episode of the Three Stooges. It's funny and while some folks may have a problem with the fact this book seems like it's becoming a bit more serious, the book is still incredibly strong and easily worth a place on your pull list, as long as you have a sense of humor and don't take your superheroes and villains too seriously. 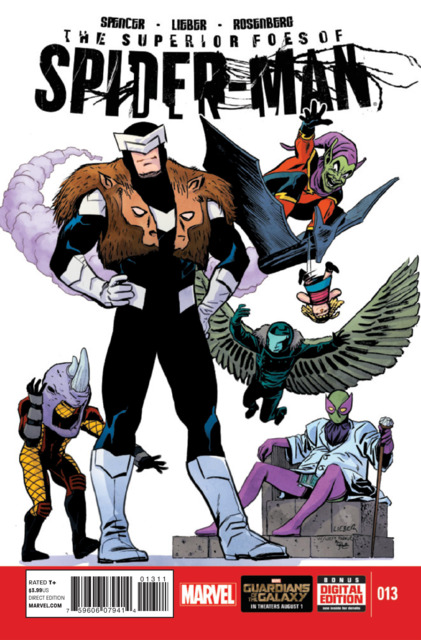