The Superior Foes of Spider-Man #12 - Hammerhead of the Family

The Shocker's bowling bag smells like buttcheeks. Also, the team actually accomplishes something.

Since day one, this absurd Marvel book has been one of the best reads at the company. It's completely unlike everything else at Marvel and it's hard to imagine a whole book about b-list Spider-Man villains working, but month after month, it proves everyone wrong.

What's really interesting about this particular issue is that this is the first time the team comes together and actually accomplishes something as they break into Chameleon and Sergei's place to get the Doctor Doom unmasked painting. Obviously, the team has some help from 12 other C through D-list villains to make this work, but what artist Steve Lieber, writer Nick Spencer, and colorist Rachelle Rosenberg leave the reader with is a chaotic scene featuring bodies flying.

What's great about the action sequences in this issue is that it's not actually about the action. It's about the characters reacting to these scenes and how they get through it. The particular scene in question is more about how Boomerang is going to get to the painting, not about bad guys beating up other bad guys.

If there's one thing this book does well, it's that it consistently makes me laugh. There are numerous moments in this issue that are laugh out loud funny, especially in the opening pages where Boomerang explains what happened to him when Chameleon supposedly took over his body. There is no other book on the shelf that not only constantly makes me laugh, but one that actually has an interesting story with great supporting characters.

Ron Wimberly's cover is awesome. It looks like the poster for a cheesy spy movie from the 60s. On top of that, readers are treated to Steve Lieber who has really defined this book through his art style. Along with the great color work from Rosenberg, this book, artistically is a huge win.

There's little not to love about this book and this series. If you hate fun, you'll probably hate this book though.

SUPERIOR FOES OF SPIDER-MAN does an incredible job of doing everything right, month after month. It entertains the reader with a fun story, stays comedic without being zany, and artistically wows the reader. This was one of the funnier issues fans have seen in quite some time and it's nice to see this team actually accomplishing something instead of bumbling through it. This is a series you should be reading. Go out and pick up the trades and catch up, unless you hate fun. If you hate fun, then don't read this. 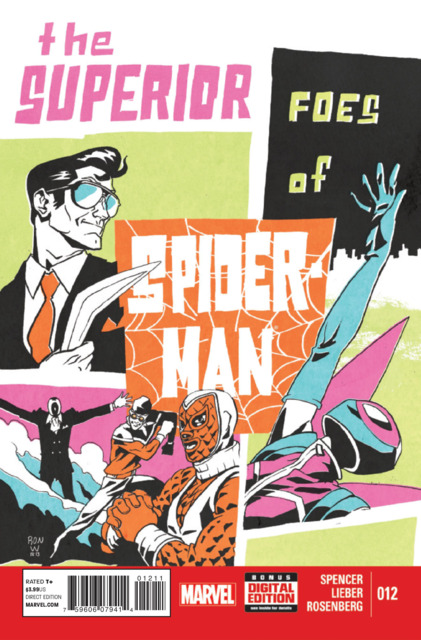