Electro has Punisher in his sights and there's nowhere to run. The Howling Commandos are closing in on Frank Castle, too!

Nathan Edmondson is creating a fast-paced and entertaining story, but Mitch Gerads' artwork is what really helps this book feel unique. These pages create such an immersive experience. You can almost hear the rain pelting the ground as Frank Castle chases after bad guys during a heavy downpour. It looks great and I hugely appreciate the focus on making these locations feel real. Another thing I appreciate: the creative use of perspective and focus in some of these panels. We're treated to yet another POV shot from Frank's sights and it smoothly transitions into the bullet impacting against its target. We're also thrown right in there as the Punisher takes damage. If something jolts him, the panel becomes out of focus. It's little things like these which really enhance the experience.

Edmondson makes sure this is an exciting issue as he finally brings the Howling Commandos front and center and, so far, it was well worth the wait. It's a gripping dose of action and, even though we all know the ending can't take a more dire turn, it was still presented so well and now has me beyond anxious to pick up the next issue. The resolution with the Dos Soles / A.I.M. plot -- at least for now -- feels a little abrupt, but it's still a fun ride while it lasts. You don't expect much humor in a book like this, but right when I wanted to exclaim,"come on, really?!" Edmondson made sure Castle expressed basically the same thought. It was a nice little laugh in between all of the chaos.

Even though this seemingly wraps up on one story and tuns up the intensity with another one, Frank's dialogue makes this feel like a friendly jumping on spot. At first I thought it was out of character to have him question what he does, but over time, the thought process made more and more sense. Sure, the Punisher has been through a lot over decades of volumes, but he's had a pretty rough ride in this one and there's way more elements in play, too. Ultimately, his resolution shines through and the internal dialogue is there to remind us of his mission. It's nothing out of the ordinary or especially compelling, but I could understand why he would need to tell himself this after finding himself in such a situation. That said, the "pay attention to me!" line did feel a little out of character, but it's one line out of an entire issue. Hardly a big deal.

As much as I admire the visuals, the way splashing water is presented feels very different from the rest of the artwork. Since it's one shade of blue, it appears to be a solid substance and stands out. It's a minor gripe but this definitely caught my eye whenever it happened.

I'm thrilled to finally have the Howling Commandos playing a bigger role, but in order for them to take the spotlight, it feels like the Dos Soles plot had to be abruptly shoved out of it. The implication is this was just the beginning of this narrative and we've yet to see all of the details, but considering all of the buildup with this plot point, it would have been nice to give it a little more focus before moving on.

Edmondson and Gerads continue to make this book a thrill ride. This is bad news for Frank Castle, but great news for us readers. The pacing is incredibly fast and there's so many awesomely crafted action scenes for us to enjoy. It's an attention-grabbing story that'll keep your eyes glued to the pages. The plot may not be all that elaborate just yet, but it sure is a rush. Gerads then does a stellar job bringing the Punisher's mission to life and successfully pulls you into all of the craziness. Because it jumps from one exhilarating scene to the next, the issue feels like a quick read and, before you know it, you'll be left wondering where they'll go next. 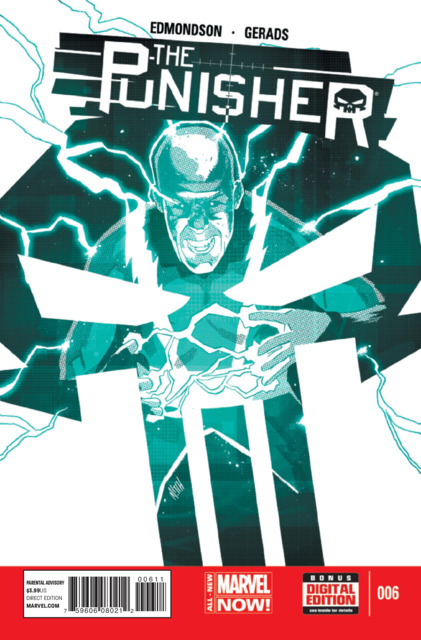