It turns out Dos Sols has Electro on their side. Good luck with that, Frank.

We're just three issues in and Nathan Edmondson's THE PUNISHER continues to be a blast. The writer's take on Frank Castle is a little chattier than what we've seen in other volumes, yet the essence of the anti-hero remains and it's all delivered with some great pacing. If you've been reading along (if not, go read #1 and #2 now, silly), then you know this issue's going to deliver some big action. Thankfully, Electro's treated with respect and doesn't become a total jobber when he's against Castle. The dude's a powerhouse and it's often his arrogance/foolishness that gets the better of him, but he's still a big enough threat that someone like Frank should have a tough time with him. Edmondson clearly gets that and, in a random encounter, let's just say it plays out how it should. It's not that long of a battle, but it's most obviously just a taste of what's to come and still pretty exciting.

There's also a bigger action bit in the end and, along with artist Mitch Gerads' work, watching Punisher run and gun against goons is a thrill. It's something we've seen him do a thousand times before, yet the style and creative use of perspective makes each shot impactful. His handling of said goons when he needs answers is a disturbing yet delightful moment as well. Once again, it simply rings true to the character and gives you a reminder of who you're dealing with.

The main narrative is moving along nicely (without giving too much away), but what's particularly interesting is how the story is impacting Sammy. It definitely seems like Edmondson has bigger plans for her and continues to give her a little more depth in each issue. I think many of us can see the path she's taking a mile away, but regardless, it'll be interesting to see how it all plays out and nice to have a supporting character potentially take a bigger role.

As stated above, Gerads' has a great style for this series. When things get dark and the action kicks into gear, it's effective and brutal yet never over the top. There's several great perspective choices that really lend a more cinematic approach. I especially dig the idea of having a couple of panels from Frank's view as he's stuck in combat. It gives you a little taste of the intensity and rush he's experiencing. One thing I truly appreciate is how much detail went into the car's interior during just one of the panels. It would have been so easy to make the background one shade and we still would have understood what's going on, yet each little aspect of the car's dashboard was in place. You can't help but appreciate the little things like that because it serves to further immerse us into the moment.

The story with the Howling Commands is making a very slow progression. It almost feels like we're randomly chiming in on them just to remind us they're still attempting to follow Frank. I know we're only on the third issue, but at this rate, it seems like they won't come into play until the very end of this plot or they'll be saved as the conflict for the next arc. Additionally, it felt like one part of the restaurant scene was blatantly giving away a plot device that'll come into play down the road.

While I adore much of the pencils and colors, the meeting between Castle and Tuggs had a pretty jarring contrast. My eyes really weren't a fan of the shade of blue being surrounded by a very vivid magenta.

Edmondson and Gerads continue to prove they're an appropriate fit for the character. Castle's blunt and vicious mission remains firmly in place, yet a likable supporting cast and some legitimate charm gives the volume a nice sense of balance. There's plenty that'll appeal to longtime fans of the character and just enough established to help make it a refreshing and appealing experience to those who think the anti-hero is too one-dimensional. There's a whole lot of potential in this volume and watching it all unfold is plenty of fun. Welcome back, Frank.

Oh, and when are we getting a Loot and Pizza Dog crossover? 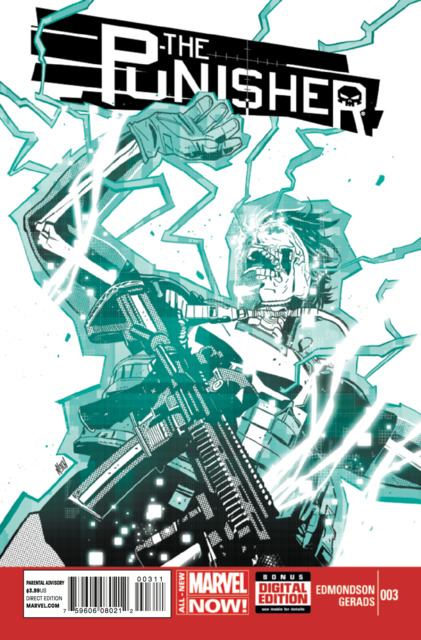