New Warriors #2 - The Kids Are All Fight Part 2

The attacks continue. As it starts to become clear who is doing the attacking and why, we can see the pieces all coming together.

This second issue picks up immediately where the first left off. In some ways, the direction here is a little strange for one of Marvel's relaunch titles. In most new series, we see the characters already established and underway in their current adventures. In some cases, it's like time has passed since their last appearance and we're jumping into the action. What Chris Yost is doing is showing us what happens before that. The series is called THE NEW WARRIORS but we still don't actually have a team (besides Justice and Speedball). We do have plenty of characters fighting a common threat that we assume will all join forces in the midst of this battle. In some ways, this is a fascinating approach as we see more of the evolution or birth of the team. This is something some might want to see handled immediately but it further emphasizes that these are all individual characters and not just random parts of a whole.

Seeing the attack on several different fronts gives the story a bigger feel. I was a huge fan of the original NEW WARRIORS but a lot of their adventures were kind of small scale. How all these characters come together and how they will get along, if that's even possible with some (Kaine is still angry at pretty much everything).

Besides seeing some of these characters within the pages, it's great seeing Marcus To's art on a monthly series again. I've really missed his work and his run with Yost on RED ROBIN remains one of my favorites. Despite the dire situation the characters are in, there's an optimistic feeling overall due to To's art and depiction of the characters. It especially makes me want to return to read the next issue.

We also have some characters we might not be too familiar with so there is the possibility of a lack of connection with these unknown quantities. For example, the new Inhuman on the subway--I have no real opinion on him and haven't decided if I care about him or not.

Too often we see new superhero teams magically come together. With incarnation of the New Warriors, Chris Yost is taking the time to present a scenario which will potentially bring them all together against a common threat. This might limit some of the interaction we would normally get in a team book but it gives the series a feeling that Yost is looking at the big picture rather than rushing the story along. Marcus To's art is always great to see. He gives his characters a youthful zeal that cranks up their enthusiasm and the tone of the book. It's refreshing to see a relaunch series that truly feels new instead of more of the same. It's time to "get your war on" with the New Warriors. 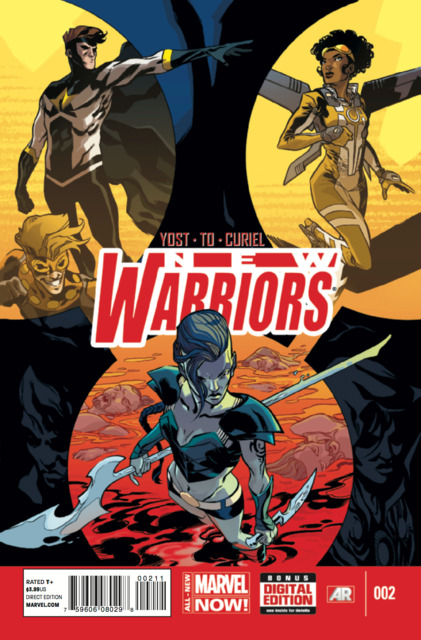