Heroes remember the life of Oliver Queen at his funeral.

It's hard not to compare the two weekly series coming out of the same company, but there is one thing FUTURES END does exceedingly better than BATMAN ETERNAL and yes, it's apparent from issue #2. This issue follows the events of one and this issue feels connected to issue #1. It doesn't feel out of place or over-introducing too many elements or characters. Everything has a solid flow to it and the story naturally happens over the course of the pages.

By far, the highlight of the issue is the speech Animal Man gives at Green Arrow's funeral. It's touching and very emotional, even though readers never knew this version of said character. Not only is this a home run for dialogue writing, but it updates readers on what has been going on in this future scenario over the past few years. It gives the readers just enough where they're updated and completely satisfied without having any larger questions about this world.

The pieces are in play and this book is building slowly towards the story, which is great. Readers don't need everything dumped on them right away. They need to be immersed into the world before they can understand what the main story is. While the dystopian future Batman Beyond came from isn't that exciting, for me, the pacing of this book and build is what will keep me coming back.

Normally, we don't do this, but this bit doesn't fit anywhere else. The characterization of Mister Terrific here feels very much unlike him. Understandably, this is the future and a lot could have changed, but one of the smartest men in the DCU worry about whether or not he's trending on Twitter feels out of character. At the same time, this is a character fans can easily hate because he's so pompous, so while Terrific fans may be turned off by the personality change, it overall benefits the story.

The story isn't grabbing me as well as it should. This story contains a lot of elements readers have seen over and over again in other books like heroes fighting with heroes about the death of a colleague, a fish-out-of-water hero making sense of the new world he's in, and a mysterious villain working for someone much more sinister. Regardless, these tropes are used pretty well.

This is a bit of a surprise since issues #0 and #1 just didn't grab me. The second week of this book gives the reader an emotional connection to these characters and the world they live in, while setting up the main players in this very large game of chess. While there's not a lot of Batman Beyond in this issue, which many folks reading this are looking for, there's a lot of good stuff in here to keep them happy. Overall, I recommend this issue. 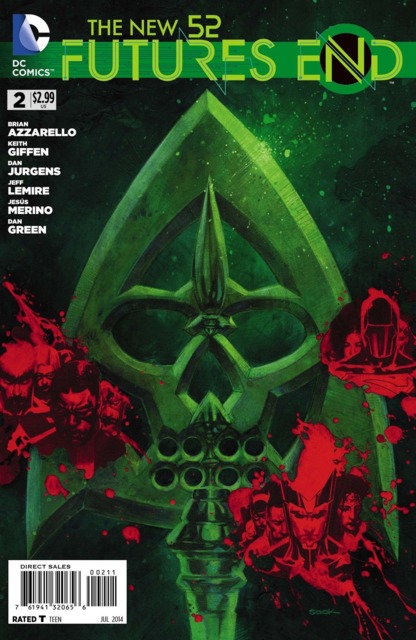