Welcome to Earth-10, where a strange visitor from another planet landed elsewhere and Hitler won WWII.

The MULTIVERSITY issues have been giving us a chance to see some of the other worlds in DC’s Multiverse. Grant Morrison has been giving us a taste of them and this time we get Jim Lee joining him by doing the pencils for the issue. The very first page will grab your attention and intrigue and disturb you at the same time.

The story is a familiar one. An alien superpowered infant has landed on Earth in a rocket ship. Only instead of landing in Smallville and becoming the hero we knew as Superman, he’s brought to Hitler to help the Nazis win the war. This is a completely different take on the character and there’s a lot that could be explored. Seeing other versions of the Justice League is a little disturbing as well. This sets up conflict (years later) for Uncle Sam and the Freedom Fighters. Morrison has to tell the story of this world in just one issue. Because of that, he does show us bits of different areas as well as what some of the other supporting characters are about.

Any time we get the chance to see Jim Lee art, I will be there. We may have seen him draw Superman, Batman, and other members of the Justice League but being that these are different versions of those characters, it’s an odd sensation seeing them in this light. As if Lee’s art wasn’t enough, we get some great colors by Alex Sinclair and Jeromy Cox.

There’s almost too much to tell in one self-contained one-shot. After baby Overman is discovered, the story jumps seventeen years forward for four pages and then jumps another sixty years forward. Because of this, much of the story has to be glossed over. What was the rest of the war like? When did the other ‘heroes’ show up? We barely even see much of Uncle Sam and the Freedom Fighters. I thought they were going to play a much much bigger role in this issue. The ending feels sudden and leaves you hanging.

Lee’s art is pretty great, as usual, but having four different inkers becomes evident at times.

Grant Morrison and Jim Lee. That’s all I needed to know to pick up this issue. Morrison’s exploration of Earth-10 is fascinating. Unfortunately there is way too much of this world to cover in a single one-shot. This causes the story to feel cramped with some missed opportunities. Lee’s art with Alex Sinclair and Jeromy Cox’s colors is great, even if there are some disturbing elements to the characters. I would have liked to see more of Uncle Sam and the Freedom Fighters but we do get an interesting look at how different this world is from the one we’re used to reading about. 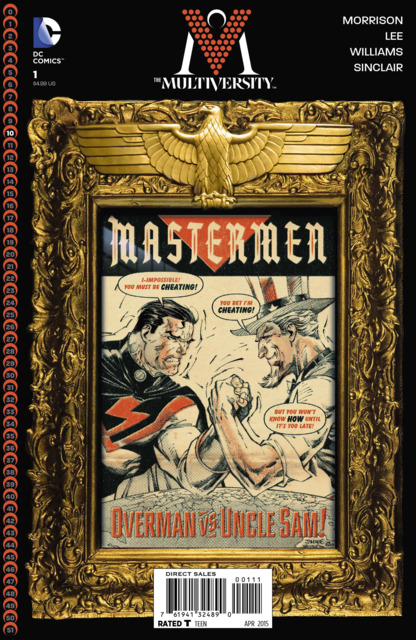