The Multiversity #1 - House of Heroes

Grant Morrison's journey through the DC Multiverse begins here. Be sure to fasten your seatbelt.

Get ready for a comic that's a little different. When it comes to comics by Grant Morrison, sometimes you have to expect the unexpected. THE MULTIVERSITY will be either totally unexpected or exactly what you thought it would be, since there's so much going on. This is Morrison being able to do what he wants and we're the ones that benefit from it.

There are different layers to the story here. Part of it gets a little meta as the idea that some of the different worlds are told in comics. As Morrison has mentioned, this is actually part of what the characters use as they go from world to world. The comics will give them information in the new worlds. They'll definitely need them.

The issue starts out with the return of a familiar face, Nix Uotan. When we have the last of the Monitors in an issue, it's time to sit up and take notice. The idea of getting to explore the other worlds in the DC Multiverse if fascinating. Calvin Ellis (President Superman), last fully seen in Morrison's ACTION COMICS #9, will play a big role. After he gets pulled in, things get even stranger as we meet other super-powered heroes from across the Multiverse. There's a nice big feel to the story by including these different characters. That's exactly what you would want in a story with this kind of scope and because we've been waiting for a little while.

To top things off, we have art by Ivan Reis and Joe Prado with color by Nei Ruffino. It's a great way to kick off the MULTIVERSITY storyline by having this first bookend part look so good. We're talking forty pages of story here. It's definitely a blast getting seeing their art cover so many different worlds in the Multiverse.

Obviously there may be some confusion during all of this. But even if you're not familiar with "President Superman" or any of the other characters, it doesn't matter since each character is quickly introduced to some extent. Knowing that this isn't a "New 52" comic will help give you the mindset you might need to dive into the story.

MULTIVERSITY is finally here and it's a trip and a half. Grant Morrison is just showing us the tip of the iceberg of the DC Multiverse. There's a big threat on the horizon and with so many different characters and worlds, there's no telling what might happen next. Ivan Reis and Joe Prado set the stage in a glorious way. This is a comic you won't want to miss. Morrison is setting up some big things here and it's going to be a fun and crazy ride. 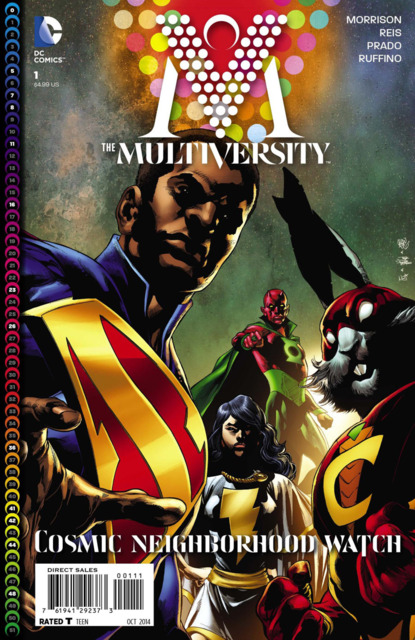