Mighty Thor #1 - Thunder in Her Veins

Jane Foster is Thor and a new battle is raging.

This is an early spoiler-free review of THE MIGHTY THOR #1 by Jason Aaron, Russell Dauterman, and Matthew Wilson. It hits comic shelves and the digital market on Wednesday, November 18.

While Jane Foster is now Thor, there are multiple threats that she must handle, including trying to beat cancer. That's the short and spoiler-free synopsis of the book, but don't let that fool you. This is a large and epic first issue. It's really hard not to get into specifics because there's so much to talk about in this opening issue, so we'll tip-toe as much as possible.

First and foremost, this is an outstanding place for new readers to jump on. Yes, there has been a ton of changes in the past few years with Jason Aaron taking over the Thor books, but it's all summed up here pretty well through Jane's captions in the opening scene. The issue really hits the idea home that what this book is dealing with is a person who is dying, trying to be a hero, even if it kills them. It's something we've seen in books in the past, but it's really the driving force of this issue and creates an instant connection between the reader and main character. We feel for Jane Foster and want to see her overcome cancer, so she can continue saving the world.

There is a much bigger story going on here as well that connects Earth to the other realms and the story is paced incredibly well and has this excellent, fluid movement from the first page to the last. Aaron is really growing the world in which these characters operate and his whole run with the mantle of Thor has done wonders with grabbing new readers, which is exactly what this issue will do.

THE MIGHTY THOR also shines in the art department. The team of Russell Dauterman and Matthew Wilson create this cinematic piece which highlights the tonal emotion of each scene. It's chaotic where it needs to be with the way the skewed panels are laid out and it's slow moving and engaging in other scenes, with a more standard and classic layout. The colorwork is bright but everything works well on the page and the shading is perfect. This is the art team you want telling this story. In addition, Joe Sabino does an excellent job with the lettering, jumping between some well-fitting fonts, and the lettering placement is perfect for leading the reader's eye across the page.

THE MIGHTY THOR #1 is a smashing success. It's one of the best first issues we've seen in quite some time and while this whole story is steeped in continuity, this is an insanely new-reader-friendly book. Aaron, Dauterman, Wilson, and Sabino have a huge hit with this first issue. Even if you're not a fan of Thor, THE MIGHTY THOR will be the book that will turn you on to the character. I highly recommend checking this issue out. 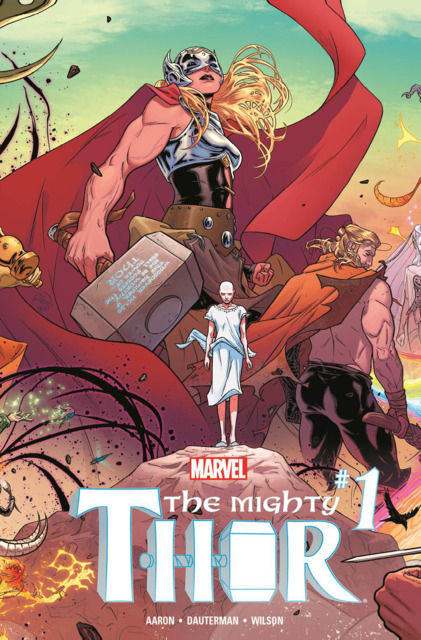