The Manhattan Projects #12 - The Fermi Paradox

The bromance is over, but the battle drones on.

Everyone on the Manhattan Projects team has a secret, and some of them have more than one. This issue, we get to learn Enrico Fermi's. He's an alien (we knew that) and he's a drone who wants to kill science. We already knew something was off, but Fermi's story makes us question other seemingly-innocuous revelations. If his secret isn't just "he's not human," but "he's actually a really bad dude who isn't human," what else isn't as it seems?

Jonathan Hickman guides us through the-story-so-far as Fermi experienced it, and throws some wrenches at us along the way; scenes that seemed straightforward before were powered by entirely different motivations than we might have predicted. Drone Status: Duplicitous, indeed. I'm marveling at how thoughtfully this series has been architected, and I'm looking forward to its conclusion just so I can do a full re-read with all of the layers in place.

The storytelling is complex and loaded with flashbacks and abrupt transitions, but none of it feels incomprehensible. The reason: Jordie Bellaire is rocking it on the colors, and her palette selection is nothing short of directorial. The past is all red and blue with intense contrast, the present is a muted rainbow, and we don't even really need caption boxes to realize where the shifts occur.

Nick Pitarra is doing a lot of really great things on this book's art, but the thing that really caught me this issue is his ability to infuse an incredible amount of emotion into a faceless man. The body language is so evocative that I find myself frowning along with Harry Daghlian -- or as I imagine he'd be frowning if he had skin and lips and muscles, at least. Maybe I'm projecting my utter dejection at the dissolution of my favorite friendship in current comics (Science Bros? I got your Science Bros right here. Or I did, at least.), but I have to credit Pitarra with amplifying that feeling.

Hickman giveth, and Hickman taketh away. A budding friendship that served as a rare glimpse of sentimentality -- and, dare I say, humanity? -- amidst a band of brilliant, self-obsessed, ruthless mad scientists is coldly severed just an issue after its introduction. It tracks with the story, but it makes things feel just another level bleaker.

Guys, I have emotions about this issue. It's tremendously conflicting, because I'm still thoroughly enjoying the series, and I still think it's smart and well-planned and deliciously weird, but I'm also feeling like Hickman just ran over my dog. (If Laika gets hit by a car, I'm out.)

If you're current on MANHATTAN PROJECTS, give Issue #11 a re-read for sentimental reasons before opening up this one. Have an ice cream while you're at it. 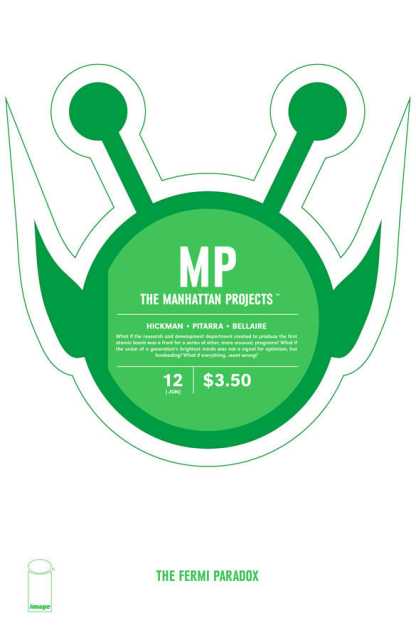